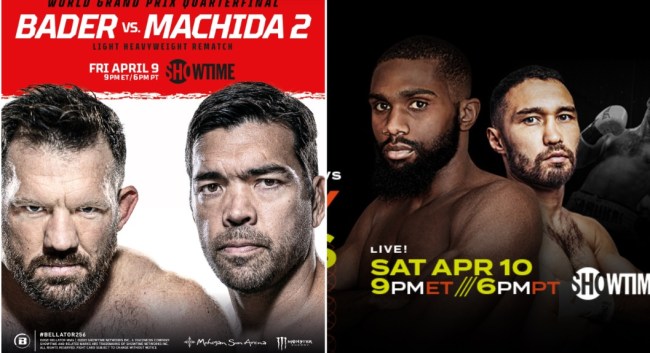 Showtime is doubling down on fights this weekend which is a good thing for MMA/Boxing fans.

On Friday night, former Bellator champion Ryan Bader seeks to avenge his brutal KO loss to Lyoto Machida during the opening round of the Bellator’s Light Heavyweight Grand Prix tournament.

Machida vs. Bader II goes down tomorrow night at Bellator 256.

Machida knocked Bader out 9 years and four days ago. pic.twitter.com/1AtGTjqjiI

Who will reign on the road to gold 🏆

On Saturday night knockout artist Jaron Ennis, who has KOed 24 out of 26 opponents, looks to add another knockout to his tally when he faces former champion Sergey Lipinets.

.@JaronEnnis is ready to prove the hype is real 💥

This weekend will mark the first time Showtime has featured back-to-back MMA/Boxing fight nights this year on the channel.

From the cage to the ring, it's FIGHT WEEK 👊🏽

For those looking to tune in SHOWTIME is offering viewers who are new to the SHOWTIME streaming service a 30-day free trial at SHO.com/BellatorMMA.