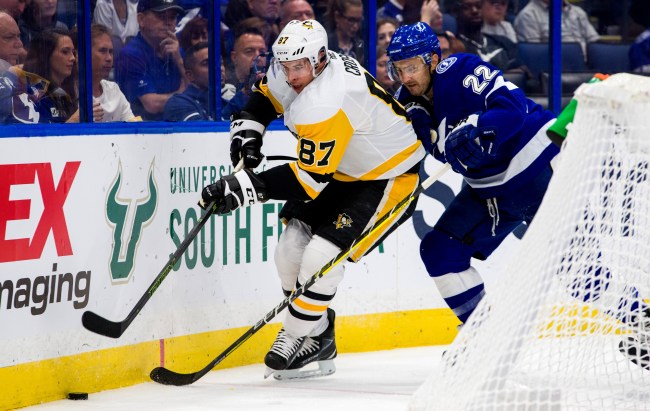 Sidney Crosby had himself a decent game Wednesday night as the Penguins played the Lightning in Tampa. The captain assisted on a Jake Guentzel goal in the second period. That point moved Crosby past Norm Ullman for 40th on the all time NHL scoring list.

Unfortunately for Crosby, it wasn’t enough as Pittsburgh fell to Tampa 3-2 when Victor Hedman scored a power play goal with 57 seconds remaining in the game.

Crosby’s night could have been even better if one fan of his sitting in the stands, Kaylee McClellan, a Disney cast member in Orlando according to her social media bio, had her way. At least according to the sign she brought to the tilt with the message, “Sid… I want my headboard to give you a concussion.”

Unfortunately for her, the 32-year-old Crosby has reportedly been in a relationship with a woman named Kathy Leutner since 2008.

Leutner, a model who participated in the 2011 Sports Illustrated Swimsuit model search (third from the left below), was last seen by sports fans at the 2014 Sochi Winter Olympics supporting her beau as he took home a gold medal for Canada.

Too bad for Kaylee, who captioned the photo of her holding her sign, “Puck bunny for life.”

On the plus side, the NHL season is just getting started.