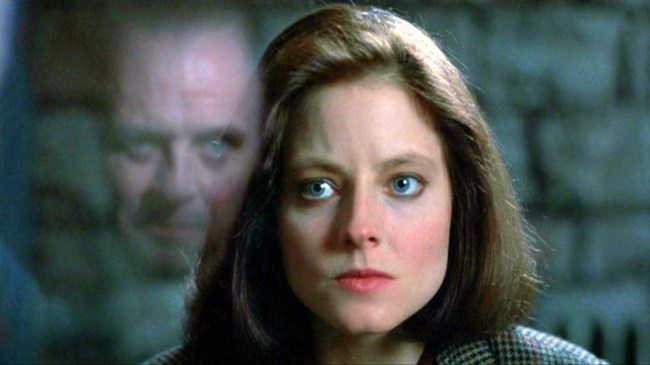 “Our old friend, Clarice Starling, is back — and not just for dinner… Picking up a year after The Silence of the Lambs, Clarice is coming…” tweeted CBS on Sunday.

That’s right. One of the greatest psychological thrillers in American movie history is getting a follow-up story that lets us know what happened to Clarice following her dealings with Dr. Hannibal Lecter and “Buffalo Bill.”

“After more than 20 years of silence, we’re privileged to give voice to one of America’s most enduring heroes — Clarice Starling,” said Executive Producers Alex Kurtzman and Jenny Lumet. “Clarice’s bravery and complexity have always lit the way, even as her personal story remained in the dark. But hers is the very story we need today: her struggle, her resilience, her victory. Her time is now, and always.”

What took so long? We’ve had four movies (including Mindhunter, Red Dragon, Hannibal Rising) and a TV series (Hannibal) all about Hannibal Lecter (the American Film Institute’s greatest villain in American cinema), but for 20-plus years we haven’t heard much about what happened to our favorite FBI trainee? C’mon, Hollywood. (Julianne Moore taking Jodie Foster’s spot as Clarice in Hannibal barely counts.)

Taking a deep dive into the untold personal story of Clarice Starling, the series will bring fans along as she returns to the field in pursuit of serial murderers and sexual predators while navigating the high stakes political world of Washington, D.C.

The project, written and executive produced by Alex Kurtzman and Jenny Lumet, has received a big series commitment.

The intention for the project, which has a pilot script written, is to go to series. It will film a pilot before a series order decision is made but a writers room has already been set up, and there is a lot of enthusiasm for the title, the premise and the auspices at the network. Needless to say, Clarice will be one of the highest-profile roles for a young actress this pilot season.

You just could have picked up #Hannibal instead. It is on all the best of the decade lists.#savehannibal pic.twitter.com/VrzOjasGrt

Clarice deserve to be in Bryan Fuller’s #Hannibal NOT THIS!! #SaveHannibal

Why not just produce a show with a proven track record and an audience that's waiting for it instead? #SaveHannibal

You know damn well that Clarice wont work without Hannibal. there is ONLY ONE EPIC Hannibal show and that is @BryanFuller 's #Hannibal portrayed by #MadsMikkelsen #savehannibal

Clarice will be written and executive produced by Alex Kurtzman and Jenny Lumet (The Man Who Fell to Earth).

Kurtzman and his production company, Secret Hideout, are at the helm of the growing Star Trek universe on CBS All Access, including Star Trek: Discovery and the upcoming Star Trek: Picard. He is also an Executive Producer on Hawaii Five-0.