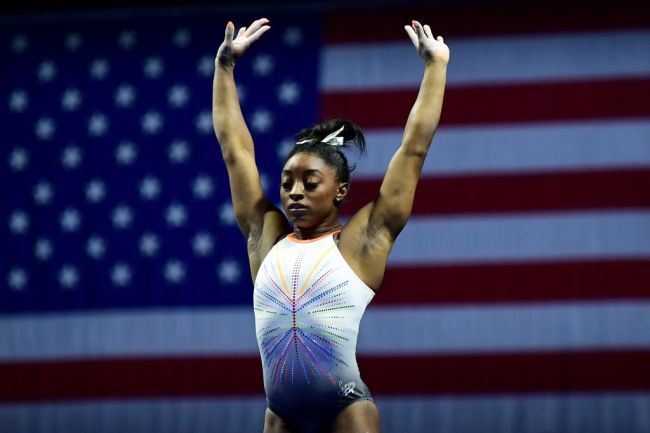 Simone Biles is simply not from this earth. America’s most-decorated gymnast is gearing up for the Tokyo Olympics and she is doing things that have literally never been done before. The 24-year-old’s new stunts are so dangerous that the sport is limiting her scores. Biles doesn’t think that’s fair. (Because it’s not.)

On Saturday, the reigning gold medalist was competing for the first time in 18 months at the U.S. Classic. She showed up in style.

Simone Biles wearing an embroidered goat on her leotard is legendary 🐐 pic.twitter.com/aUZyyNJmyd

As she reached the vault portion of the event, Biles attempted a move so difficult that no other woman had even attempted it— the Yurchenko double pike. She had landed it in practice a day prior, but it had never before been done in competition.

Simone Biles stuck her Yurchenko double pike in training this morning and she’s going to win all of the medals 😱🥇pic.twitter.com/b0sHo2HiH8

The move begins with a roundoff back handspring onto the vaulting table. From there, she flips twice in pike position (body folded, legs straight) before landing on her feet. Biles landed her attempt but she, somehow, sent it too big. She actually over-rotated and had to take a few steps back on her landing. Her athleticism is unmatched.

She is the first woman in HISTORY to perform the move in competition. @OnHerTurf pic.twitter.com/j07ZweTA0f

Everything about the vault was impressive and the small crowd in Indiana was sent into a frenzy. The judges, however, were not.

Despite the extreme difficultly, the vault was given a provisional score value of 6.6. To put it into context, that is virtually equivalent to what Biles scores on her other vaults. The limited points available for a successful Yurchenko double pike frustrated Biles.

Speculation suggests that the move is scored so low because of its safety for gymnasts who can’t do what Biles does. By giving it a low start value, it might keep others from attempting the insane vault.

Others believe that the low score stems from Biles being too good. There might be concern she will run away with the competition by attempting (and landing) moves that her competitors wouldn’t even dare to try.

“They don’t want the field to be too far apart,” Biles said to the Times. “And that’s just something that’s on them. That’s not on me. They had an open-ended code of points and now they’re mad that people are too far ahead and excelling.”

Nevertheless, Biles does not plan to slow down and will keep pushing her limits to elevate the sport. When asked why she would continue to do the moves that are not properly rewarded, she told NYT, “because I can.”

Biles is the best in her sport and it’s not even close, so it’s time to reward her accordingly.