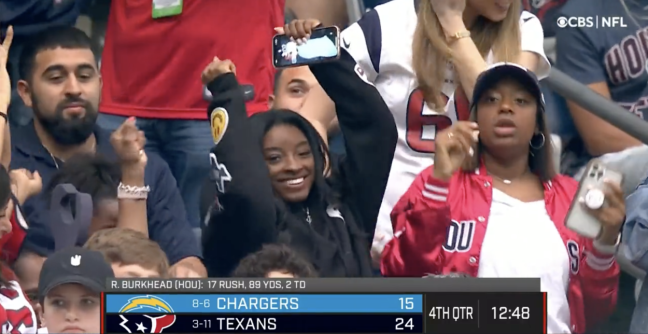 It was all smiles in Houston for Simone Biles on Sunday. The 24-year-old gymnast G.O.A.T. was in attendance at NRG Stadium as the three-win Texans took down the eight-win Chargers in definitive fashion.

Not only did Houston have a big day offensively, but it was the defense that secured the win. At the forefront of two big plays was safety Jonathan Owens, Biles’ boyfriend.

Between wanting to spend the Christmas holiday together, and the fact that Owens was making his first-career home start, Biles made sure to be in Houston for the weekend. She also happened to be a good luck charm.

Owens had a massive day in the win.

Late in the first half, Chargers quarterback Justin Herbert dropped back and looked over the middle for his receiver, Josh Palmer. The throw as a little bit off of the mark and Owens stepped in front for the pick.

It was Owens’ first-career interception and his gold medalist girlfriend just so happened to be in the crowd. She was all fired up in the stands.

Later in the second half, Owens was involved in another big play.

Early in the fourth quarter, LA running back Justin Jackson coughed up the football. It bounced once on the turf before a diving Owens dove and landed on the ball. He held on in the scrum and came up with the turnover.

When the game came to a close, Biles was turnt.

Owens didn’t begin the year as a starter. But after his performance on Sunday, it would be hard to keep him out of the lineup.

He just needs to make sure that Biles is there to share some of that gold medal magic.