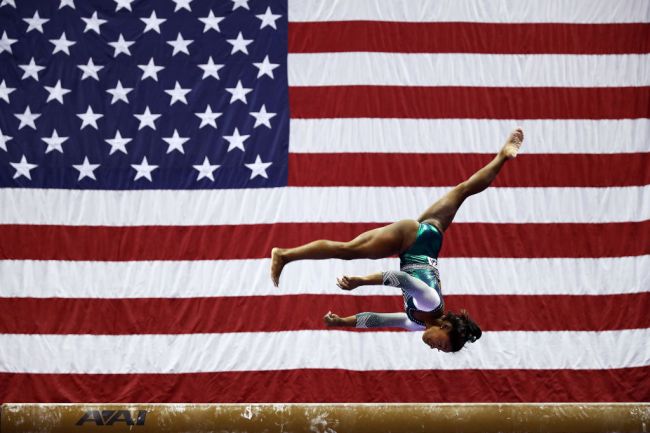 Nothing can epitomize a hellish year more appropriately than the most prominent Olympic story thus far centering around a debilitating case of the “twisties.”

In her Instagram stories, the four-time gold medalist responded to those who accused her of quitting on her team by revealing just how dangerous “not having your mind and body in sync” can be.

“literally cannot tell up from down. it’s the craziest feeling ever. not having an inch of control over your body.what’s even scarier is since I have no idea where I am in the air I also have NO idea how I’m going to land. or what I’m going to land on. head/hands/feet/back…”

The 24-year-old claimed the phenomenon “randomly started happening” when she landed in Tokyo, “by that time NO an alternate was not allowed to be placed in my position for you ‘know it alls.'”

On her IG stories, Simone Biles responds to people who think she “quit” on her team by explaining the “the twisties” she’s been experiencing and what it feels like “not having your mind and body in sync” …. pic.twitter.com/79hN973rkd

“For anyone saying I quit, I didn’t quit. My mind and body are simply not in sync,” Biles wrote accompanied with video cuts of her failing to properly dismount off the uneven bars.

“I don’t think you realize how dangerous this is on hard/competition surface nor do I have to explain why I put my health first. Physical health is mental health.”

Biles then fielded questions from her 6.1 million Instagram followers.

Do you still have them?

yes. unfortunately so. those videos were taken this morning at practice.

Do you feel off sync for non twisting flips too?

honestly kind of…but def better than if I try to twist. sometimes I can’t even fathom twisting. I seriously cannot comprehend how to twist. strangest & weirdest thing as well as feeling.

About how long does it usually take for it to leave?

unfortunately it varies with time. typically for me its about 2 or more weeks when I’ve had them before. honestly no telling / time frame. Something you have to take literally day by day, turn bu turn

Aimee Boorman, who coached Biles when she won four gold medals at the 2016 Olympics, has witnessed Biles battle twisties in the past.

“Every once in a while, she would form this block and it usually had nothing to do with the gymnastics itself, it had to do with other things going on in her, in her universe,” Boorman told Stephanie Gosk on TODAY Thursday.

As of now, Biles is still scheduled to compete as an individual in the vault, bars, balance beam and floor exercise on Sunday, Monday and Tuesday.