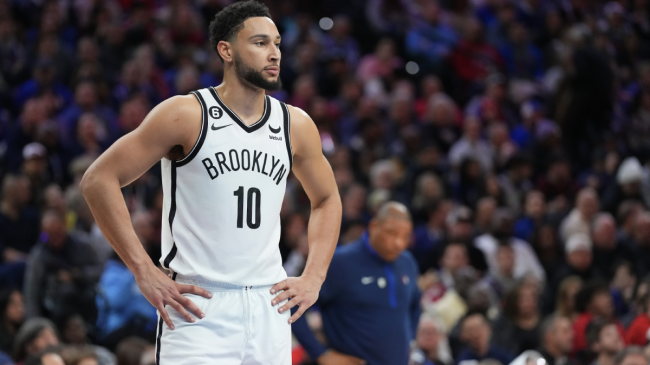 Ben Simmons made his long-awaited return to Philadelphia on Tuesday in a 115-106 loss to the 76ers. While his new team fell to his former, Simmons played respectably, notching a double-double with 11 points and 11 assists.

As expected, the forward was welcomed to the Wells Fargo Center to a barrage of boos from the Philly faithful. That reception showed just how deeply rooted the hate for Simmons is following his ugly split from the organization.

The fans weren’t the only ones being spiteful in Simmons’ return to The City of Brotherly Love. The team’s marketing department also took a shot at the former Sixer with one of their in-game promotions.

The 76ers offered free Chick-Fil-A to fans for missed Ben Simmons free throws. And those fans went home happy as they landed a five-piece nugget meal for the forward’s poor performance at the stripe.

The “Bricken for Chicken” promotion stated that if Ben Simmons missed both free throws in a trip to the line that everyone in attendance would receive a free meal. It’s something that’s been seen at other venues at both the professional and collegiate levels, but I’ve never seen it targeted at a single player.

Then again, there aren’t many teams and fanbases that hold a grudge like the Sixers do with Simmons. In this case, though, he wouldn’t let the Philly faithful down. While he shot 57% from the field on Tuesday, his performance at the charity stripe left a lot to be desired.

Simmons connected on just three of his six free throw attempts. On one of his second half trips to the line, he came away empty-handed, leading to an absolute eruption from Philadelphia fans.

Sixers fans will now be able to cash in some free chicken after enjoying a victory over the now-hated Nets. A true win-win.