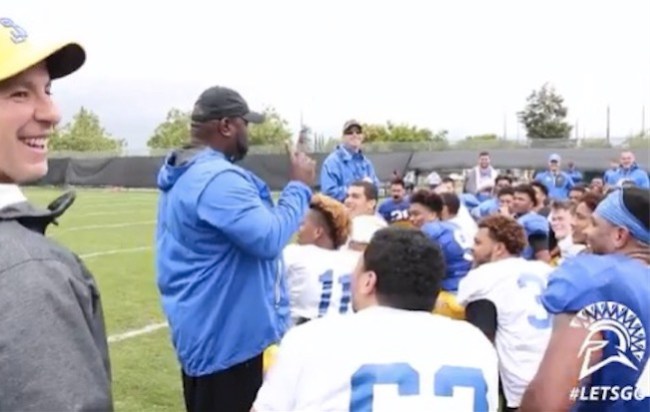 The Running Backs Coach for San Jose State Football has had an interesting career path up until now. He helped the San Jose State Spartans win a bowl game in 2015, and according to their Wiki page, the SJSU Spartans have 15 former players currently in the NFL. Those are respectable numbers.

You’d think that their coaching staff would be filled out with lifelong/career coaches, but Running Backs Coach Alonzo Carter spent some time away from football to dance on tour for MC Hammer back in the day. During a recent Spring practice, he surprised his players by busting out the ‘Hammertime’ dance, a video that has since gone viral:

Can't Touch This!! @RealCoachCarter with the moves from his days being on tour with @MCHammer ! #LetsGo 👌 pic.twitter.com/a0pouTYL6c

As a comparison, here’s MC Hammer busting out The Hammertime back in the day:

I understand why football coaches often force players to do yoga for flexibility and core strength. I get why there’s a need for unorthodox training in the offseason to shock every muscle in the body. But, I’m seriously failing to connect the dots of how dancing on tour for MC Hammer relates to football.

Was he just a gifted dancer but also previously a good football player? Is it a coincidence? Is there some connection between running backs and dancing that I’m unaware of? I’m flummoxed.