Skip Bayless Calls Out LeBron James For Shooting, And Making, Fadeaway Instead Of Being ‘Clutch’ And Getting To The Free Throw Line Against Celtics 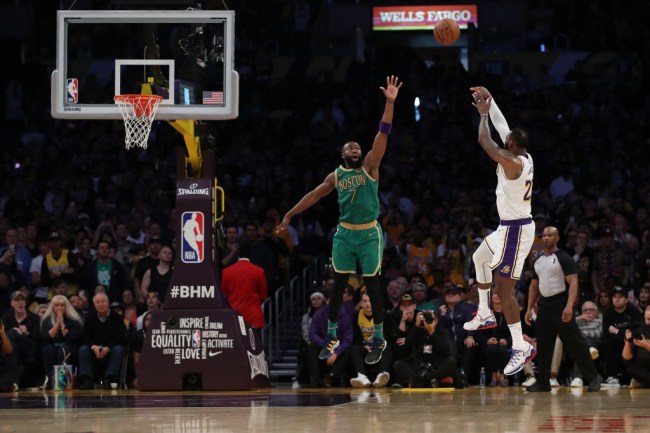 Skip Bayless is a hot take machine, we all know this, but on Monday morning he delivered a take on LeBron James and fadeaway jumpers that may just find its way onto his Mt. Rushmore of spicy takes when it’s all said and done.

James and the Lakers took down the Celtics 114-112 in what was a thriller on Sunday afternoon. James finished the game with 29 points to go along with nine assists and eight rebounds and with 30.4 seconds left in the game he hit a go-ahead fadeaway.

Bayless didn’t think the shot was impressive at all and certainly not ‘clutch’ which is mind-blowing. Bayless decided to go on a lengthy tangent on Undisputed essentially calling James a coward for electing for a fadeaway instead of trying to draw a foul to go to the free-throw line.

"My man LeShannon Sharpe had the audacity to say that LeBron got revenge after getting dunked on. How did he get revenge? LeBron literally and figuratively faded away from the free throw line. He ran backwards from the FT line." — @RealSkipBayless pic.twitter.com/LfJeAJBovt

Bayless does have a point in suggesting that James perhaps was avoiding going to the charity stripe as he struggled at the line going just 7-for-12 in the game, but to criticize him for going with a fadeaway, especially after he made the shot, is insane.

James has been hitting fadeaway shots like that for over a decade now. Come to think of it, there were three pretty dominant players named Kobe Bryant, Dirk Nowitzki and Michael Jordan (not sure if you’ve heard of them) that made a living hitting fadeaway jumpers as well.