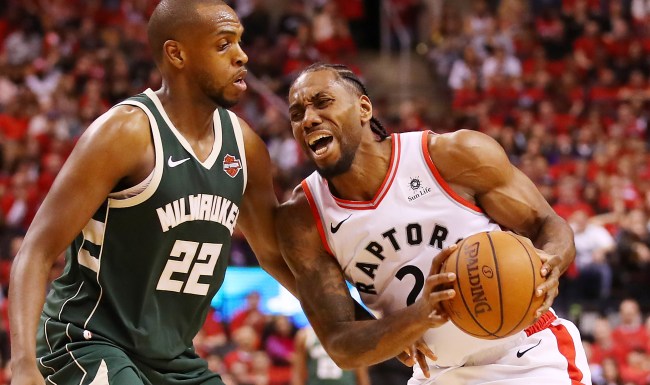 Tuesday night, during Toronto’s 120-102 win over the Bucks, Raptors star Kawhi Leonard was clearly favoring the leg he injured during his team’s win over Milwaukee on Sunday.

“He’s playing through pain,” Danny Green told reporters after Game 4. “He can’t even celebrate baskets because of how painful it is. You dunk on a guy like Giannis and you are worried about your knee, it shows you that he’s fighting. We’re going to need him to fight through the rest of this series. We need two more.”

Leonard, for his part, says he is fine, “I can keep going, keep fighting. We have a chance to make history. There’s no excuses. You’re playing basketball. And we got a win tonight.”

Not everyone is buying the fact that Leonard has been fighting through a painful injury, however.

For instance, Undisputed host Skip Bayless not only doesn’t believe it, he even has a handy conspiracy theory about it that he decided to share on Twitter Tuesday night.

If you're a longtime Spurs fan, you know you can never quite trust and depend on No. 2. Is he hurt tonight? He seems to be moving just fine. Is he out of gas? IT'S THE CONFERENCE FINALS!!! The truth is, No. 2 often is what he is not.

“He seems to be moving just fine.” Has Skip been watching sports with Stephen A. Smith again?

The Raptors did not put No. 2 on the official injury report. Yet now he has shrewdly built in the mysterious injury excuse – is it his quad? his knee? – just in case he crumbles under the pressure to lead his team vs Giannis'.

Sooo, Leonard is not hurt, he’s just limping around in case the Raptors get eliminated. Got it.

This is San Antonio all over again. Obviously, the Raptors' med staff is so unsure what's wrong with him, they didn't even put him on the injury report. BUT … he power-cuts, dunks and limps. Huh? Why? What exactly is wrong? Ginobili and Parker: Been there, done that.

Iff Nick Nurse believed No. 2 is really hurt, no way he would've put him back in a blowout with 7 minutes left.

Are you sure about all that, Skip? I mean, you’re judging all of this from what, your couch? What’s that? You are and you will prove it on national television? Cool.

"Toronto's supporting cast is better than Milwaukee's. … They have whole lots of help for No. 2. When Kyle Lowry, a 5x All-Star, gives you a 30-point game in this series, he gives you 25, and he made 10-out-of-10 free throws last night, that'll work." — @RealSkipBayless pic.twitter.com/vfSTCB5JyL

Skip is really into that whole “San Antonio all over again” comparison. Oh well, at least everyone agrees with him.

Skip is one of those people who will talk around the whole apology instead of just apologizing for being wrong. pic.twitter.com/zxDC7Z0zdN

Wow you’ve been in this game way too long to come at a man’s character to say he’s faking an injury that’s way below your character Skip and professionalism within your craft but as a man of principle you give T Parker a pass take his word,after he slept with wife of teammate Sad

Poor Spurs fan who misses his favorite player who used to play on his favorite team. You once talked about kawhi like he was going to be better than LeBron and he had a supporting cast of Duncan, Ginobli, and Parker and the best coach in basketball.

Dude really questions Kawhi's character. I get critiquing his game but his character? I wish more athletes would call out these sports reporters and hold them accountable for their words. Then again, that's probably what they would want. More exposure.