Skip Bayless Doubles Down, Goes After Russell Westbrook’s Wallet By Saying He’s Most The ‘Overpaid Player’ In NBA History 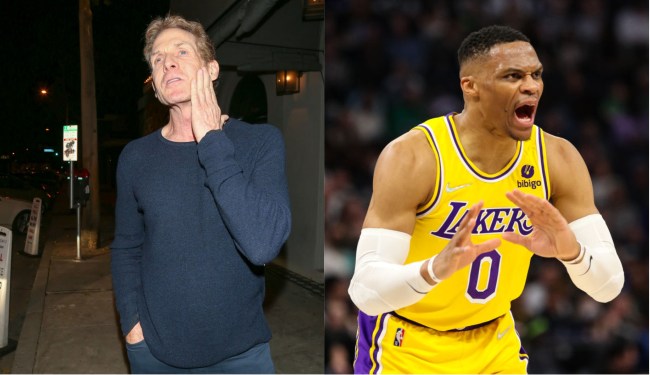 Perhaps aware that the sports world is now entering the quietest time of the year until football starts back up again in September, Fox Sports 1’s professional loudmouth Skip Bayless has escalated his beef with Los Angeles Lakers point guard Russell Westbrook.

During the NBA Draft on Thursday night, Bayless, who has taken plenty of shots at the 33-year-old All-Star over the years, tweeted that “Michigan State’s Max Christie, who shot only 32% from 3 last season, [will] fit right in with LeBron and Westbrick.”

Westbrook, obviously fed up with the “Westbrick” nickname that Bayless has bestowed upon him, replied to the tweet by telling the 70-year-old sportstalk personality to “watch his mouth” and to not say anything he “wouldn’t say to his face.”

Yoooo… watch your mouth. Don’t say anything here you wouldn’t say to my face. https://t.co/0u8nFXYLY8

On Sunday — just hours before the Colorado Avalanche won the Stanley Cup, which officially kicks off the sports world’s “Slow Summer Season” [where baseball, in its dog days, is the only major American sport in action] — Bayless decided to double-down on his growing beef with Westbrook.

Clearly choosing not to mince words, Bayless — who called him the most “overpaid player ever” and the “worst three-point shooter” in the league — invited Westbrook on his show to talk about how he’ll earn a $47 million salary next season.

Hey, Russell Westbrook (@russwest44) … happy to talk face-to-face about the nickname I believe I originated in 2012. JOIN ME ON TV/PODCAST. Let's talk about how you'll make $47 mil next yr after being THE WORST 3-PT SHOOTER IN THE NBA! Most overpaid player ever? PLEASE JOIN ME

At the time of this writing on Monday morning, Westbrook — who admittedly had his worst season in about a decade last year — has yet to reply to Bayless.