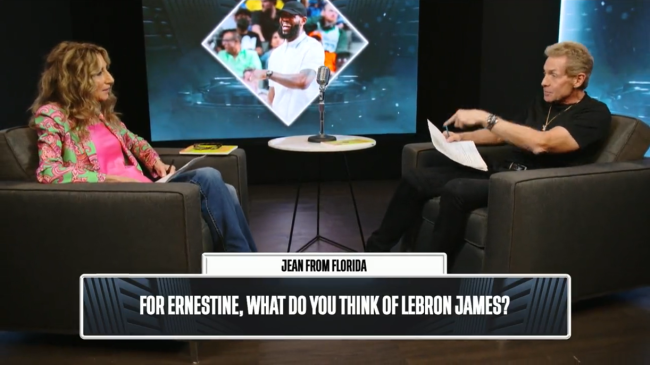 Week after week, year after year, like the salmon of Capistrano, you can always count on talking head Skip Bayless hating on LeBron James.

There have been pages upon pages documenting Skip Bayless’ disdain for one of the greatest NBA players of all time on TV and on social media.

Thursday, on The Skip Bayless Show, one viewer submitted the question, “For Ernestine, what do you think of LeBron James?”

Interestingly, Skip Bayless’ better half, his wife Ernestine Sclafani, has no such qualms about King James. She actually likes LeBron.

“You and I have never spoken about LeBron at home,” Skip responded. “I don’t bring it home [this elicited a laugh from Ernestine], so I’m curious… Seriously, until this moment, have we ever had a long conversation about LeBron James?”

“No, “I don’t bring it up because I’m afraid,” Ernestine answered. “I like LeBron, I’m sorry. I’m going to admit. I do like LeBron James. I think that he’s done wonderful things for being a role model, I know he curses occasionally, but everybody curses…”

“He curses a lot,” Skip interjected.

“But I think that he seems to be a nice guy” Ernestine continued. “Even after the game and they talk to him, he’s really calm and he’s really nice, you know, he tries. I don’t have hatred for him. He’s built schools and he’s done all these wonderful things.

“I saw him walking on Central Park South one day. I was walking and I was going to say hi to him, but I thought he was going to punch me if I told him who I was so I just looked at him from afar and I said, ‘wow, he’s really tall.’

NBA fans, as one might expect, love the fact that Skip Bayless’ wife is big LeBron James fan.

My wife and I have never spoken about LeBron James at home. So what does Ernestine think of the King? She answers here: pic.twitter.com/OPPG6CAuiH