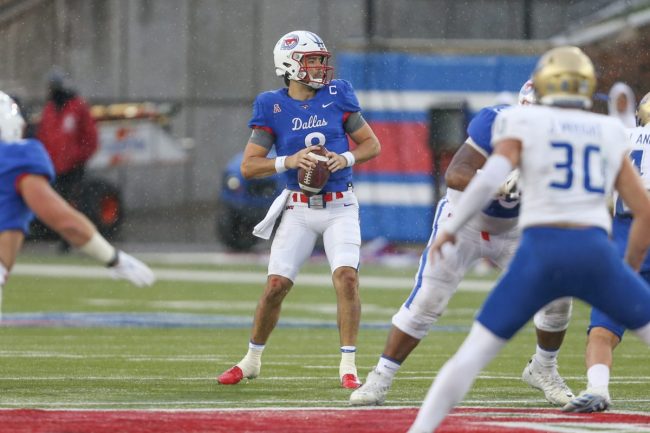 The SMU football team is having an issue at their home stadium ahead of the 2022 season.

With less than two weeks remaining before the start of college football, pictures have been taken showing a huge bubble at the 15-yard line of the field. The Dallas area was hit with heavy rain this week, which presumably caused the bizarre bubbling.

The downpour was so torrential that campus police had to start issuing safety warnings for students, who’ve just arrived back to campus for the Fall.

The rainstorm effectively flooded Gerald J. Ford Stadium. Take a look at the wild picture below.

Gerald J. Ford Stadium at SMU with some slight issues at the 15yd line after heavy rainfall today pic.twitter.com/ysjzjVONkq

It looks more like a deserted tropical island than a football field. Some fans compared it to a golf green surrounded by water. Whatever you want to call it, it could provide some major issues if not fixed up over the next few weeks.

Luckily, SMU starts the season on the road before hosting Lamar on September 10th. The situation should be cured by then, but that didn’t stop fans from offering some hilarious reactions on social media.

Fans were quick to react to seeing the insane bubble on the football field. Take a look at some of the responses on Twitter.

This should be a permanent fixture at SMU games like the old hill in centerfield at the Astros stadium https://t.co/2K63or2v5h

Pitchers mound/possible multi-sport stadium? SMU's way of announcing they are bringing baseball back after a 42 year absence? https://t.co/14Lk9yrTxO

Preview of the upcoming season pic.twitter.com/jMDTXcZV5g

SMU experiencing some problems in the red zone early in the season. https://t.co/JfHgCAZgW8

This guy might have an idea of what’s causing the problem.

Water displacing air in the soil causing a massive air bladder below the (synthetic?) turf field at SMU. I’ve seen this happen on a much smaller scale on shallow-rooted Poa annua putting green turf but nothing like this! 😬 https://t.co/TfHB5Yc9Mp

Maybe all that NIL money can help with a solution.

Maybe SMU Collective money would be better spent fixing their field because there appears to be a small problem here..#BoulevardCollective https://t.co/Ifxw7rouy9

SMU is currently looking into how to fix the deformation.

Per an SMU official, a turf company will check things out when the rain fully ends.

Hopefully, it’s all cleared up by September 10th for the Mustangs’ home opener.