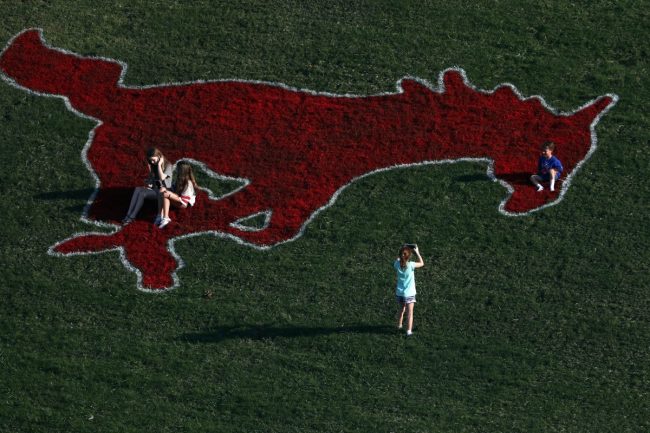 The SMU Mustangs will be unveiling a new NIL agreement that will pay its football and basketball players the equivalent of an entry level salary. News of the Boulevard Collective was reported by On3 earlier this week.

The collective, which will pay out a whopping $3.5M each year, is set to pay SMU football and men’s basketball players $36,000 each season.

Now, it’s not the first NIL collective we’ve seen in college sports, but it might be the most significant.

The Mustangs, infamously known for their pay-for-play cheating scandal in the 1980s, can now start a new version of the Pony Express. The previous instance landed the program a death penalty, from which it’s just now recovering. The new agreement, however, is perfectly legal.

SMU, while being a Group of Five program, has a donor base with deep pockets. The university is positioned nicely in the Dallas area, and its supporters are already flashing their wealth.

The NIL deal is already one of the best in college athletics, and it could certainly entice top high school prospects to come aboard.

SMU was once a national power, competing with major brands like Texas and Oklahoma in the Southwest. Once they were slapped with a football death penalty, that prominence disappeared.

The football program is making its way back, having won 25 games over the last three seasons, but they’re hoping this NIL deal will help them take the next step.

Plus, the work of @PonySportsDTX, which already has done $1M in deals.

Pretty staggering numbers out of #SMU and the school does full cost of attendance money, too. https://t.co/lSY9dvN8y7

Basketball players will benefit, too, and that program has posted five 20-win seasons since 2014.

Take a look at the immediate reaction of both SMU and college sports fans on social media.

SMU fans are excited about the future of the program.

Forgot Texas. SMU is BACK https://t.co/5a1BeowEmG

Those boosters from the 1980s might not be as happy to hear the news.

All of SMU's boosters from back in the 80s right now. https://t.co/WHiefcmIcY pic.twitter.com/CPanvDOJPL

SMU once paying players was made legal again https://t.co/1jssTaN8Q1 pic.twitter.com/0IL3sct1nv

Should the Mustangs rise to power, a jump from the AAC wouldn’t be out of question in today’s age of conference realignment.

A sleeping giant no doubts about it. The Dallas market and history tell me the NIL era could return SMU back to prominence. If the ACC expands to the Midwest this would be a top option. https://t.co/CIFpsoJYa9

One thing we can all agree on… The Pony Express is BACK!