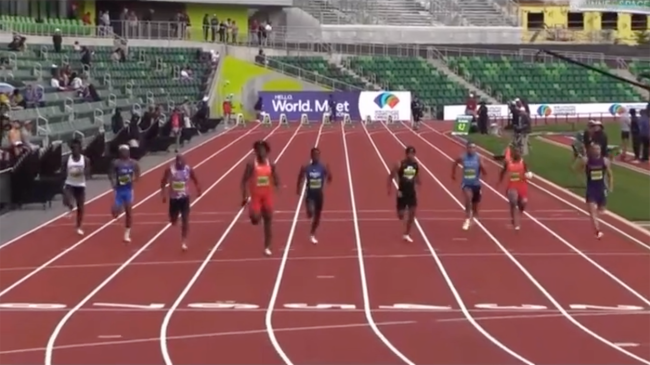 SMU football is getting the fastest high schooler in the country this fall. The Mustangs signed three-star safety Pierre Goree Jr. back in December and he is set to enroll at the university in the coming months.

He also happens to be the fastest sprinter in the country. Goree won not one, but two national championships in track and field over the weekend, but he is left frustrated with his time.

The Duncanville, Texas native competed at the Nike Outdoor Nationals at the University of Oregon’s legendary Hayward Field. Goree ran in both the 100-meter sprint and the 4×100-meter relay.

He won them both.

Things got started on Saturday night with the individual event. Goree blew past everyone in the field and won a national title as America’s fastest high schooler by .07 seconds.

However, Pierre Goree thinks that his time in the national championship was a lot faster and he said so himself on Sunday morning.

And he might have a case. When you slow down the video of the event, Goree appears to have fully crossed the line at the 10.1-second mark.

That 10.1-second number might even be a bit exaggerated— Goree may have been closer to the 10 or even slightly sub-10-second mark. He has run win-aided 10.08, 10.09 and 10.1 times in the past, so it’s not hard to imagine that he was closer to those numbers on Saturday than the nearly .3-second slower time he was granted.

Either way, it was a dominant performance. To cap things off, Goree and his Duncanville teammates won the 4×100-meter relay and it wasn’t even close.

When SMU takes the field this fall, it’s hard to imagine that the staff in Dallas won’t find a way to get Goree on the field. His speed is insane and the Mustangs are getting a two-time national champion.