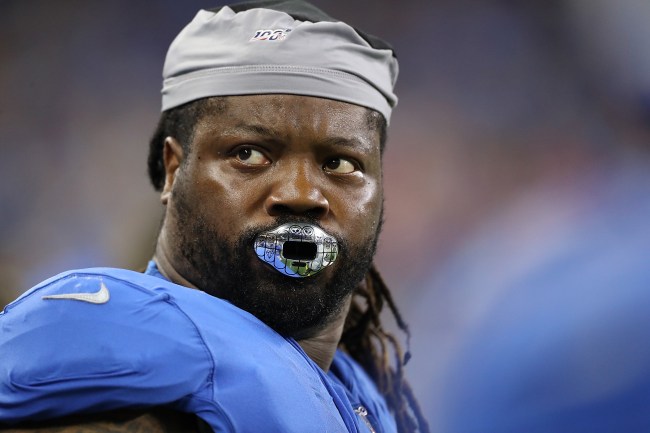 Call me old-fashioned, but nothing gets me wetter than raw human moments from pro athletes. I mean wet as in tearful, you sicko. But gold star for me for sneaking the words ‘wetter’ and ‘raw’ in a sentence not about sex. I deserve a golden shower.

In the latest installment of Why Am I Crying In This Denny’s I Didn’t Even Follow His Career That Closely?, Detroit Lions nose tackle Damon “Snacks” Harrison gave an incredibly humble interview following the Lions season-ending loss to the Packers Sunday.

Here's Snack Harrison's emotional chat with the media as he ponders his future. #Lions pic.twitter.com/JL8afungzw

Now close your eyes, imagine you are a guy, like say, Antonio Brown, and attempt to read the following words in his voice:

“Nobody is more disappointed about this season and my performance than I am. I am hard on myself. I have given everything to every team I have played for. I don’t feel bad if that’s the decision (retirement). I got a lot of thinking to do this offseason. I am going to seek some different options and try to figure it out. If I can’t be that guy that I want to be, then, I have to hang it up because everybody deserves better.”

If you were to read that in Antonio Brown’s voice, then congratulations, your imagination is more expansive than mine. This would require a little something called personal responsibility and honest introspection.

If your eyes aren’t wetter than a pack of chicks when I rock my jean cargo shorts and Abercrombie Undefeated Season tee.

#Lions Damon "Snacks"Harrison tearfully said he hasn't made decision to retire yet final "I got too much pride…so if I can't be the player that I'm used to being I think my teammates deserve better, my family deserves better…I never cheated the game a day in my life" pic.twitter.com/Mo4FGz8AdR

“I gave it everything I had, even when it wasn’t good enough.”

Snacks’ body went through the ringer this season, as the former first-team All Pro was on every injury report dating back to Week 8, with some weeks listing as many as three separate injuries.