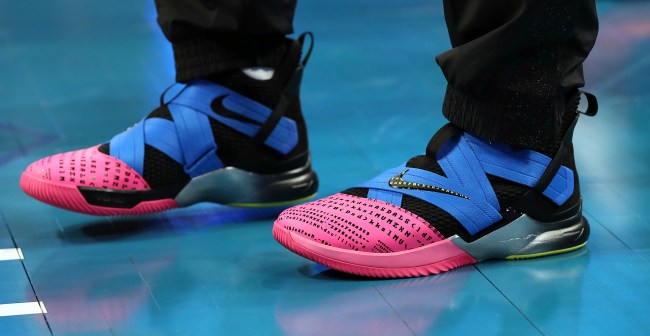 NBA All-Star Weekend is pretty much the mecca for sneakerheads as so many of the league’s superstars break out extra special kicks, many that we’ve never seen before, and in several cases will never see again.

For instance, that unique pair of Nike LeBron Soldier 12s you see up there? Those are the sneakers Orlando Magic and Team Giannis center Nikola Vucevic rocked during Sunday night’s 68th Annual NBA All-Star game.

Heck, sneakers are such a big deal on NBA All-Star Weekend, the NBA itself created a page on its website listing all of the sneakers players wore during the game.

But those 27 players weren’t the only guys rocking sick kicks, nor was the All-Star Game the only time during the weekend we saw some sweet sneakers.

The Rising Stars game, the Skills Challenge, the Dunk Contest, and the Three-Point Contest also provided opportunities for players to impress with their choice of footwear.

.@stephencurry30’s Under Armour Curry 6 PE for the 3-Point Contest borrows its colors from the jacket he wore on the bench while watching his father Dell compete in the same event in 1992. pic.twitter.com/m7cYgelyp5

And the rest of the best…