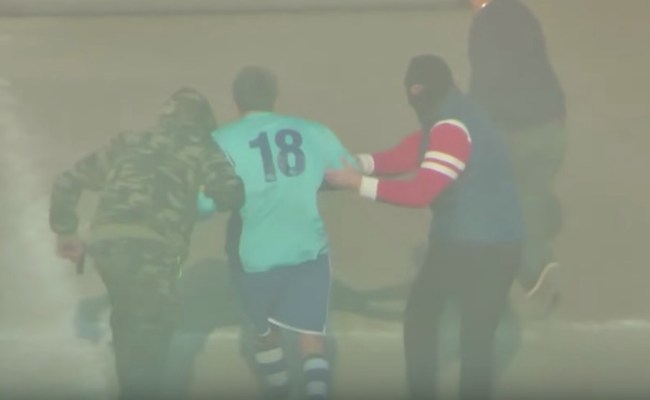 An amateur Sicilian soccer player retired last week in the most memorable way possible. Sicily is synonymous with ‘La Cosa Nostra’ or The Mafia, so what better way to end a career playing the beautiful game than land a helicopter on a field mid-game and stage a mafia-style kidnapping with dudes flashing guns?

I can’t even begin to fathom what would happen if something like this took place in America. People would lose their shit unless everyone was in on it. I’m curious as to how many teammates knew what was up ahead of time or if everyone was completely surprised.

According to this MSN report, the soccer powers that be weren’t super stoked about this prank and how everything went down but that doesn’t matter now because he’s retired and now he has this badass footage of the staged Mafia kidnapping:

Here’s the report from MSN:

Ignazio Barbagallo was playing for the Citta di Viagrande against Play Shop Nebrodi in the Catania – Girone A division when the drama unfolded, according to FOX Sports Italy. Footage posted to YouTube by Sicily-based YouTube channel Stipsy King, on which Barbagallo has previously appeared, shows a helicopter landing in the middle of the pitch, throwing up a large amount of dust and causing players to take cover behind a dugout. Masked men then exit the helicopter and can be seen “kidnapping” the 55-year-old at “gunpoint.” The prank didn’t go down well with footballing authorities and Citta di Viagrande received a €200 fine and was banned from playing until May 31, 2019. Barbagallo was banned from playing until June 30, 2019, but that shouldn’t matter – the prank was reportedly intended to mark his retirement from the sport. (via)

According to Extra Mustard, players/fans realized it was a prank when someone in the stands was spotted holding a sign that read “elimination service for finished players” in Italian.

I have to reiterate that this is probably the best retirement in the history of professional sports and if someone were to ever pull something off like this in America it would be on ESPN for week and the cover of every publication in the world. So if any D-League athletes out there are thinking about retiring and want to make a name from themselves on the way out they need to take notice.