An Ocean Away, The European Soccer World Paid Tribute To George Floyd 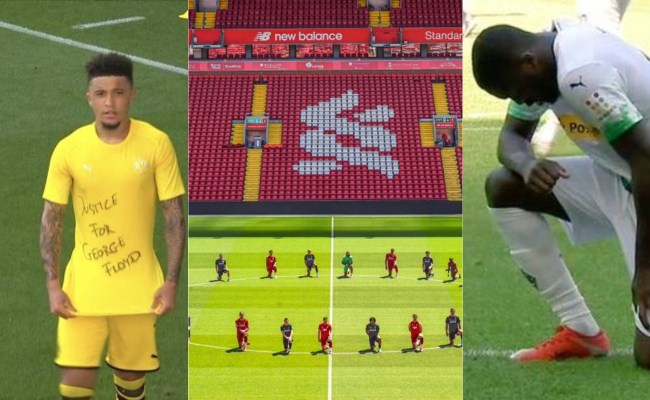 The outrage regarding the murder of George Floyd is not reserved only to the United States, as protests all across the globe — in cities such as Toronto, London, and Berlin — have begun to pop up in the wake of yet another senseless killing of an African American in the custody of the police.

I’ve worked on the internet for five years now — before I was at BroBible, I essentially covered breaking news — and I’ve always said that the worst part about working on the internet is that you live here, so trust me when I say that the worst part of my job has always been seeing just how far and wide this world is fucked from top to bottom — all over the globe. It’s grim but it’s the truth.

This is why the murder of George Floyd is nothing new to me — I’ve seen it over and over and over again on the internet for as long as I can remember being an adult. It is abundantly and indisputably clear this disease of racism is incessant in our corner of the world. The horrific murder of black people in this country at the hands of the police happens every single month, if not every single week, and now the issue has gotten so out of hand that civilians, actors, and athletes across the globe — particularly in the world of soccer, which is the only major team sport that is up and running these days.

Think about that for a second — cultural icons of Western civilizations are now protesting the United States. As they should. Black Lives Matter.

Marcus Thurman of Borussia Mönchengladbach in the Bundesliga