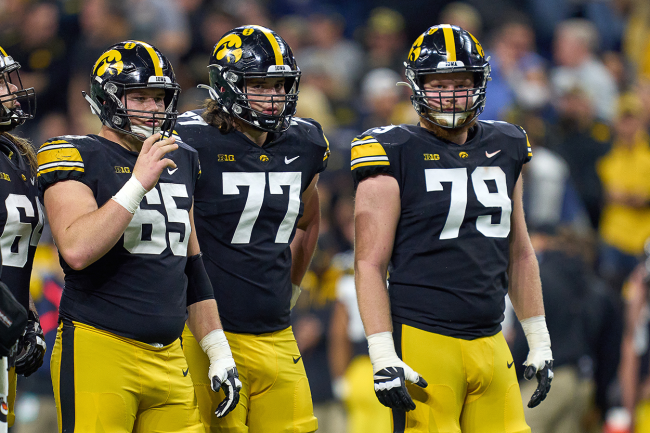 Located about 20 minutes away from the University of Iowa is the small town of Solon, Iowa. The town of just under 3,000 is not much bigger than a square mile, but it is home to one of the most legendary events in the state.

The ‘Solon Beef Days’ is an annual festival that is totally free and has been held every year since 1971. Its history is vast and more than 25,000 visitors meander down Main Street without having to spend a penny each July.

Of the many events that take place at the festival, including a tractor pull, cornhole tournament, horseshoe tournament, big wheel race and parade, the most famous is the Hay Bale Toss. The concept is simple— toss a hay bale as high as you can.

To determine the winner, a pole vault rig is set up in the middle of Main Street. Each competitor then proceeds to throw a hay bale over the bar, with the bar moving up after each round until only one person is left in the competition.

Over the past few years, a new tradition has been born. Iowa Hawkeye athletes (mostly football players) drive north to Solon for the Beef Days and takeover the Hay Bale Toss.

That was the case on Friday during the 2022 Solon Beef Days Hay Bale Toss.

It has become rare that a non-lineman wins the event, but the first few rounds weed out the weak. The lowest bar setting was light work.

This first round is like warmups for Gennings Dunker. pic.twitter.com/0LjR5kirDq

As the bar continued to grew, more and more competitors dropped out. By the time that it reached the 11-foot mark, it was mostly lineman left in the competition and cornerback Riley Moss.

Riley Moss gets his second attempt at 11 ft to go over. He’s hanging in there with the linemen. pic.twitter.com/AC0nZxcgHC

It was the 12-foot mark that really separated the field.

The hay-equivalent of an air ball by Riley Moss pic.twitter.com/9dsO8eaSWl

When the bar was moved to the 12-foot-6 mark, only one man was able to throw his bale overtop— redshirt freshman offensive lineman Gennings Dunker. Dunker, who stands 6-foot-5, 316 pounds, was the winner.

USC and UCLA have no idea what they are getting into. By moving to the Big Ten, they are going to have to go up against these corn and beef-fed midwest Big Uglies who are hucking hay bales over 12.5-foot poles. They should be very, very scared.