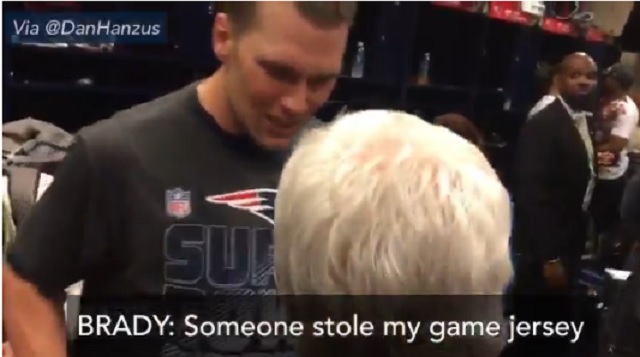 USA Today is reporting that someone straight up jacked Brady’s jersey while he was talking to the media after tonight’s Super Bowl.

Brady looked flustered as he searched his locker area at NRG Stadium but was unable to locate the game-worn jersey that he donned in leading the Patriots to a 34-28 overtime victory.

“It was right here. I know exactly where I put it,” Brady said as he called the security staff and team equipment managers to assist in the search.

Backup quarterback Jimmy Garoppolo told other players to look for the jersey, but the longer he searched, the more Brady seemed to grow concerned it had been stolen.

While walking out of the stadium, Brady was asked by USA TODAY Sports if he had managed to locate the jersey during his extensive search.

NFL: Hey can someone give Tom Brady his jersey back? #SB51 (via danhanzus) pic.twitter.com/QTPCrj4D5s #NFL