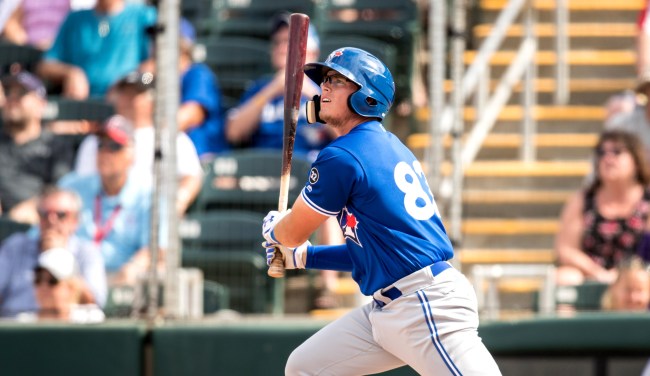 Kacy Clemens, the son of Roger Clemens, and Conner Capel, the son of former Astros pitcher Mike Capel and Roger’s godson, have been awarded $3.24 million in their lawsuit over injuries suffered in a bar fight.

Clemens, pictured above playing for the Toronto Blue Jays in a 2018 spring training game, and Capel sued the Concrete Cowboy Bar in Houston over an assault that took place in the wee hours of Jan. 1, 2019.

Clemens, 26, and Capel, 23, claim they were singled out by a bouncer who tried to throw them out that night and were attacked by other bouncers and staff members.

Capel, who is an outfielder in the Cardinals organization, suffered a skull fracture above his eye from where witnesses said he was hit with a flashlight. Clemens had bruises and had injuries to his neck and throwing arm.

Kacy Clemens and Conner Capel are suing the Concrete Cowboy for an alleged assault. Roger Clemens testified in the trial and the bar's attorney ended up hitting him with questions about steroids. https://t.co/PQZirOt4k2 via @houstonchron

“The culture of Concrete Cowboy needs to be exposed for what it is – bouncers who make it their mission to brutalize and assault patrons who they perceive to not follow their orders. The bouncers picked on the wrong group of innocent young men in this instance and we intend to bring the employees, managers and owners of Concrete Cowboy to justice,” said attorney Randy Sorrels after filing the lawsuit.

Among the witnesses called during the proceedings were Kacy’s father Roger Clemens.

“It looked to me like they had been in a car accident,” Roger told the jury, reports the Houston Chronicle.

The attorney for the Concrete Cowboy called into question Clemens’ credibility by bringing up the steroid accusations that have been trailing him his retirement.

Yes, he went there.

The bar’s attorney questioned whether Clemens was always a positive influence and raised well-known allegations that he used steroids late in his career. He also questioned whether that has stood in his way to a spot in the Cooperstown Hall of Fame.

Clemens has never admitted to the claims, even testifying to Congress denying that he used performance-enhancing drugs. He was later acquitted of charges of perjury, making false statements and obstructing Congress over that testimony.

He stayed quiet on the subject Monday, pointing to his acquittals.

“We proved all that,” he said.

Clemens claimed that the bar fight has hindered his son Kacy’s professional baseball aspirations despite the fact that the entire 2020 minor league baseball season was canceled due to the pandemic.