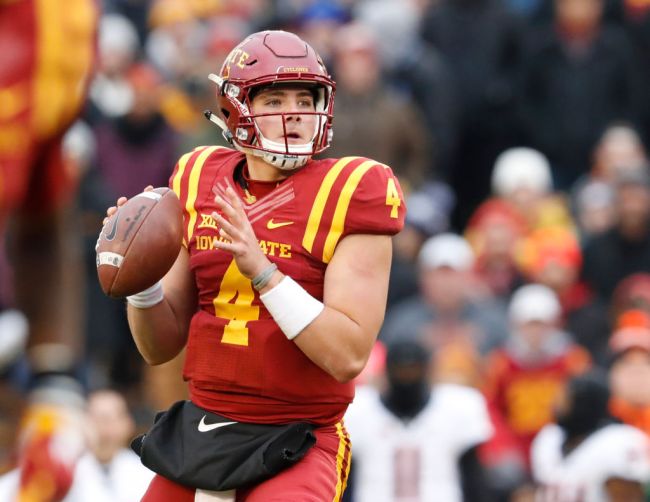 South Carolina football is 17 days away from opening the 2021 season against Eastern Illinois and might be forced to start a graduate assistant at quarterback. Zeb Noland, who has one year of eligibility remaining, was moved from the sideline to the active roster on Tuesday.

It isn’t quite the same as when South Central Louisiana State University put its Waterboy in at linebacker or when Michigan tried its towel boy at wide receiver, but it’s as close as it will get in real life.

Noland is no schlub. The 23-year-old Georgia-native spent the past four years backing up two potential first round NFL Draft picks.

Noland, a three-star recruit out of high school, stands 6-foot-3, 215 pounds. He began his collegiate career at Iowa State and appeared in nine games, starting five, during the 2017 and 2018 seasons.

While with the Cyclones, Noland completed 60.2 percent of his passes for 1,255 yards, six touchdowns and two interceptions. He was ultimately relieved of the starting job by true freshman Brock Purdy in 2018. Purdy emerged as a star, has high expectations in 2021 and could be selected in the top five of quarterbacks in the upcoming draft class.

“I saw Zeb in 2018 (when I was at) Oklahoma with Kyler Murray, CeeDee Lamb, and Marquise Brown, and that squad we had in 2018 rolled into Ames, Iowa against Zeb and the Cyclones,” South Carolina head coach Shane Beamer said. “It was a back and forth game.”

Noland left Iowa shortly after losing the job and transferred to North Dakota State. He ultimately lost the quarterback competition to Trey Lance, who was drafted No. 3 overall in April.

After leaving the Bison program, Noland joined the coaching staff at South Carolina with one year of eligibility remaining. Now he is trading his whistle for a helmet.

The Gamecocks had a lot of turnover at quarterback in the offseason and had only four players at the position entering fall camp. When presumptive starter Luke Doty sprained his foot in practice last week, it threw a wrench in head coach Shane Beamer’s plans.

In an attempt to counteract the lack of the depth, Beamer decided to tap Noland in practice. Grad assistants are able to practice with the team and that was the case on Tuesday.

After practice, Beamer elevated Noland from the sideline to the gridiron.

“Most college football programs in the country, I can’t imagine any of them are practicing with three quarterbacks right now,” he said. “At Oklahoma this time (last year) we had six. When we were at Georgia we had well over three.”

With Doty’s status uncertain for the season opener on September 4th, Noland is not only a practice quarterback but in the mix for the top spot.