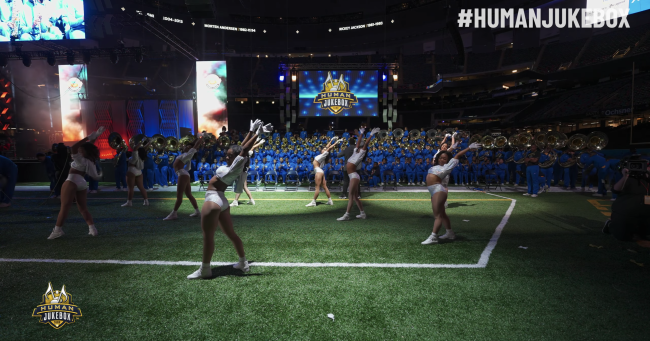 When it comes to college marching bands, there are very few better than Southern University’s Human Jukebox. They put music into motion.

Each year, on Thanksgiving or Thanksgiving weekend, Grambling State and Southern get together for the annual ‘Bayou Classic.’ While the football game between two prominant Historically Black College and University programs means a lot, it is not necessarily the most important result of the rivalry.

On the night before the game, both bands gather on the field of the Superdome for the Battle of the Bands. In front of a crowd that is sometimes bigger than that of the game, both marching bands go head-to-head.

As opposed to a traditional game day, where both bands are in full uniform and performing elaborate formations that put music into motion, it is all about the music. Both bands set up on their half of the field and duke it out with brass-blaring, drum-banging performances. It typically lasts about an hour.

This year, Southern covered a variety of artists, from 42Dugg to Kevin Gates to Silk Sonic. They also played an amazing rendition of Adele’s ‘Easy On Me’ and it is a masterpiece.

Sit back, relax, and enjoy the audible ecstasy that is the Human Jukebox.

Here they are performing the Tottenham-native’s most recent smash hit. A special shoutout also goes to the Dancing Dolls.

This is not the first time that the Human Jukebox has played Adele. They also played ‘Hello’ at the 2015 Battle of the Bands and it was just as awesome.

Although the event is called the “Battle of the Bands,” the real winner of the night is those in attendance. Both Louisiana-based schools’ fanbases travel well to the game, and to the performance the night before.

But has become even bigger than that. Men, women and children from all across the state show up to watch two of the best bands in the nation go back-and-forth.

You can watch this year’s full Battle of the Bands below: