Southern Miss To Literally Play Without A Single Quarterback, Will Start NFL Running Back’s Son Instead 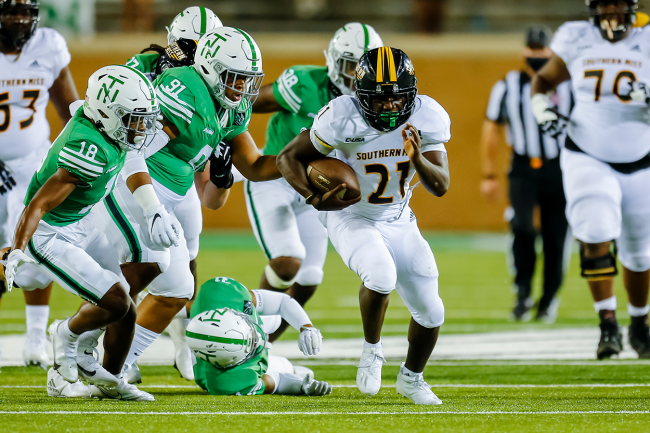 The University of Southern Mississippi football team released a depth chart for this weekend’s game against Louisiana Tech on Thursday and it is truly unprecedented. The Golden Eagles did not list a quarterback. Literally.

Southern Miss does not have a QB listed on the depth chart for this week👀 pic.twitter.com/wMHrHezYAw

As the team gears up to travel to Ruston for Friday’s game, it will be prepared to have multiple people behind center. First-year head coach Will Hall spoke with media about the depth chart situation after it was released and said that he plans to have six or seven players at quarterback. SIX OR SEVEN players at QUARTERBACK.

The move is truly unprecedented.

Redshirt sophomore Trey Lowe was named the starter for Week 1. He was lost for the year with an injury in Week 2.

In the backup role, Ty Keyes took over. He lasted only three games before the injury bug struck again in the conference opener.

The third string, a former scout teamer and walk-on, was next in line. Jake Lange was never the full-time starter in high school and the same can be said for college.

As a result, Hall decided to turn to a revolving door at the position. Lange was the starter, but over the next four games, five different players took a snap at quarterback.

Junior college transfer Jack Walker played against UTEP and even former student coach Jake Smithhart was asked to suit up and play behind center.

Despite the continued search for answers at the position, Hall never found one. He decided that his best chance to win was to give the ball to his star player on every play.

Gore Jr., who runs just like his father with more speed, was both the leading rusher and passer for the Golden Eagles in a 13-point loss to undefeated UTSA.

Now, less than a week later, Hall is saying that Gore will be the guy once again. However, with an additional week to prepare for the bizarre quarterback-less system, he plans to get up to SIX OR SEVEN players involved.

This is truly unprecedented and is going to be A LOT of fun.