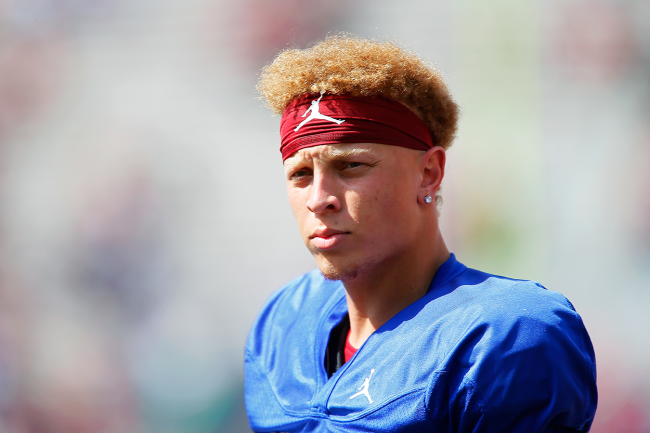 Spencer Rattler is hoping that his one-year stop at South Carolina is enough to get him back near the top of NFL Draft board come April. However, there is still a long way to go.

The former five-star quarterback recognizes how much he still has to learn and offered a refreshingly honest take on learning his new offense and dealing with the haters. In addition, he is always looking to get better and is one of the many elite quarterbacks at the Manning Passing Academy in Louisiana this weekend.

On Friday night, Rattler was given the opportunity to show off a little bit. He and the other quarterbacks took to the field for an after-dark session in which they each got a chance to spin the pill a little bit.

To cap each session, they were given a deep ball over the middle.

Rattler stepped into his throw around the 30-yard-line and found his receiver at around the opposite 25-yard-line with a flick of the wrist.

Obviously, Rattler is just throwing against air. But after his struggles last fall, people forget that he has one of the most raw arms in the country. He has incredible arm strength.

The Gamecocks were not supposed to go over .500 last season. But they went 7-6 with a bowl win over North Carolina, despite significant struggles at the quarterback position.

Rattler will hope to be the missing piece this fall and lead South Carolina back to national relevance. If he can get his deep ball working like he did on Friday, he’ll be fun to watch.