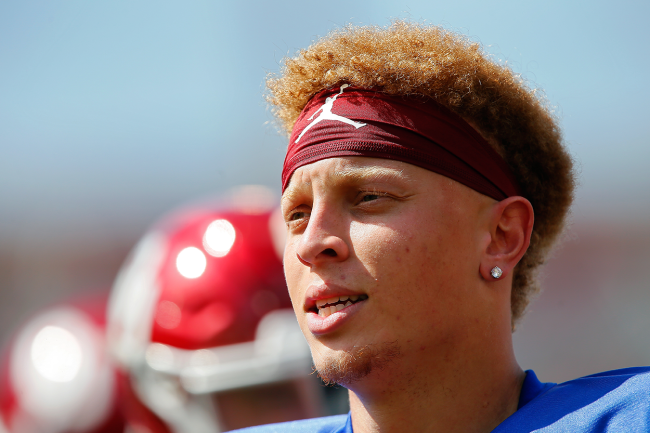 Spencer Rattler has high hopes for 2022. After a tumultuous career at Oklahoma, the former five-star quarterback is settled in at his new program.

Rattler was once a preseason Heisman trophy candidate and has generated dark horse hype ahead of this upcoming season. His goal, of course, is for South Carolina to reach new heights with a dominant winning record, but if he was able to end up in New York, that would be an added bonus.

In addition, a large part of Rattler’s fall will be to improve his NFL Draft stock. To do so, he working closely with his coaches and trainers to emulate one NFL quarterback in particular.

During a recent interview with 247 Sports, Rattler shared that the Gamecocks’ offense under offensive coordinator Marcus Satterfield is similar to that of the reigning Super Bowl champions. He said that what they are doing in Columbia is similar to what McVay and Kevin O’Connell were doing in Los Angeles.

“It’s really like the same offense as the (Los Angeles) Rams. That’s a lot of the tape we watch. What they’re doing, we’re doing. You definitely have your shots down the field but it’s just a good offense. It’s a balanced offense. We do a lot of good things, so I’m excited to fully learn all of it. I’ve learned dang near all of it already, but we got a lot more install to go throughout the summer, so I’m just gonna soak it all in and prepare the best as I can.”

Because the Rams’ offense shares such significant similarities, Rattler told 247 Sports that he has been watching a lot of film of their quarterback, Matthew Stafford.

“Right now I like what (Los Angeles Rams quarterback) Matthew Stafford is doing. We’re watching a lot of his film because we run similar offenses, similar plays. It’s helped me to see what he does, how he goes through his reads against these coverages or these looks or at these game-time situations. I’m really watching him. Of course you’ve got Aaron Rodgers, Russell Wilson, (Patrick) Mahomes. I’m just taking the film you see and try to implement it on the field. When I go back home to Arizona, I’ll be training different types of stuff with my quarterback coach as well.”

Currently, Rattler is back home in Arizona and has been working with his coach, Mike Giovando. The two have been working together since the quarterback was very young and they are always grinding whenever he is in The Grand Canyon State.

Getting the ball out of his hands quickly is one thing that Stafford does really well. When he sees his receiver open, he does not hesitate and delivers.

While Rattler is back home, he is working on his quick five-step drop and release. In a video posted by Giovando, his motion is much faster and he is firing.

There is a lot of hype surrounding Rattler. South Carolina is coming off of a 7-6 season that everybody thought would be a “rebuilding year” and has bolstered its offense through the transfer portal and the addition of its new quarterback. Will the Gamecocks be able to emulate the success of the Rams?! Stay tuned.