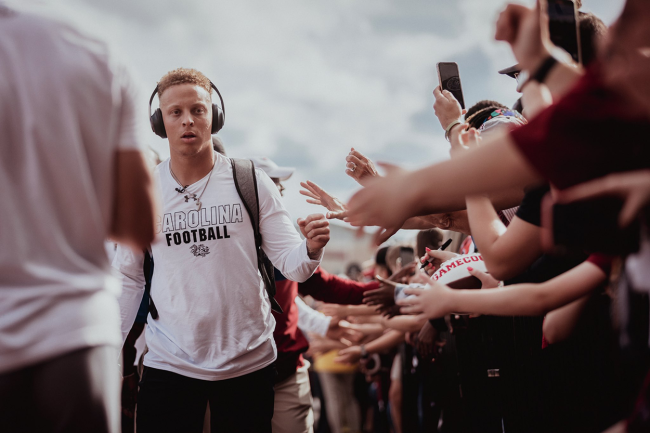 It has been a wild and crazy career for Spencer Rattler thus far. Now that he is settled-in for what is likely his final year of college football, it is impossible not to buy into the hype after watching him during the South Carolina spring game.

On Saturday afternoon, the Gamecocks lined up on the field at Williams-Brice Stadium for the annual Garnet and Black game. It was the first opportunity for the public to get a look at their new quarterback and the fans showed out.

There is a lot of hype around Gamecocks football and Spencer Rattler this fall.

After arriving to Oklahoma as a No. 1-ranked five-star recruit, the Arizona-native led the Sooners to a Sugar Bowl win in his first year as a starter.

As a result, Rattler was considered a preseason Heisman Trophy candidate. That goal did not come to fruition and he was benched in favor of Caleb Williams after falling behind 28-7 in the first half against Texas and never regained his starting role.

Thus, at the end of the season, Rattler transferred to South Carolina and the coaching staff has been impressed with what they have seen. As were those in attendance on Saturday.

Rattler went 8-of-10 for 79 yards in his limited work. While his numbers did not jump off of the page, his best throw of the afternoon will continue to grow the preseason hype for 2022.

Rattler ran play action to his left, turned back to his right, stayed patient in the pocket, read the defense, split the coverage and delivered a strike over the middle for a first down.

Rattler with a solid pass down the field! pic.twitter.com/LaVRmAk48o

Obviously, the same size from one throw is small. However, it was a clear and definitive improvement over his awareness and pocket presence in the past— something that he has been working on.

After the game, head coach Shane Beamer had nothing but good things to say about Spencer Rattler’s performance.

“I thought Spencer (Rattler) did well,” he said. “We had the play clocks going and we didn’t really have any personnel issues or play clock issues. We were pretty clean from that standpoint. Certainly, we weren’t showing everything, but it wasn’t like we were limiting a whole lot either. There was nothing that we said offensively that we weren’t going to do formation-wise or personnel groupings.

“There was nothing that I told [defensive coordinator Clayton White], ‘Hey, don’t blitz us or don’t do this.’ He could run anything that he wanted. Certainly, there are some things offensively that we did not do a ton of. I thought Spencer did a good job. Made some throws and had some receivers, tight ends and running backs make some catches for him too.”

On the other side of things, Rattler was thrilled with the turnout on Saturday.

Spencer Rattler on playing at Williams-Brice tonight for the first time. “That was an environment I've never seen before for a spring game." pic.twitter.com/yiQKgVtZOe

The 21-year-old is the highest-rated quarterback to ever sign with South Carolina and hopes to rediscover his swagger while leading the Gamecocks back to relevance.