Spike Lee Says He’s Spent $10 Million On Knicks Tickets During Lifetime, Will Not Attend Anymore Games This Season Because He’s Being ‘Harassed’ By James Dolan 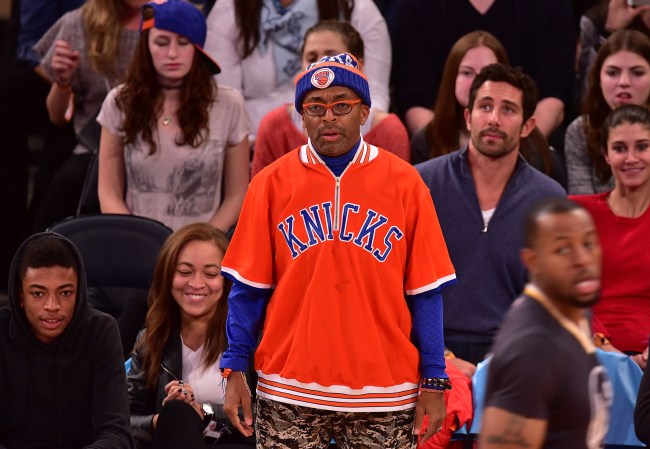 Movie director and famous Knicks superfan Spike Lee is the latest celebrity to beef with Knicks owner James Dolan and it looks like things are going to get ugly.

Before Monday night’s Rockets-Knicks game at The Garden, a video circulated on the Internet that showed Lee getting into a confrontation with arena security.

Apparently, Lee attempted to use the employee entrance to Madison Square Garden and was denied access by security.

A Knicks' spokesperson confirmed that it is "untrue" that Lee was ever asked to leave the Garden on Monday Night. According to the spokesperson, there was a mix up over which entrance Lee should enter through.

More on Spike Lee at MSG – He spoke to Jim Dolan at halftime and the issue was resolved. He is still here in the fourth quarter in his seat. Spike had tried to enter through the employee entrance.

On Tuesday morning, Lee went on ESPN’s First Take to tell his side of the story and claims the Knicks owner is harassing him for some reason.

The part of the Knicks’ statement that Lee said was untrue: Owner Jim Dolan and Lee shook hands and were smiling. “I wasn’t shaking hands, in fact when he came over I didn’t get up right away… I said Mr. Dolan, I’ve come in the same entrance 28 yrs. Why wasn’t I notified?”

"I'm being harassed by James Dolan and I don't know why."

Lee, who says he spends $300k a year on Knicks tickets, will not be attending any more games this season.

Spike Lee's response when finding out he spends roughly $300K a year on Knicks tickets and has given them almost $10M over 30 years:

You won't see Spike Lee at another Knicks game this season, according to him. pic.twitter.com/jdcNLBeopC

Update: The Knicks have fired back at Lee’s claims and are calling his allegations “laughable”.