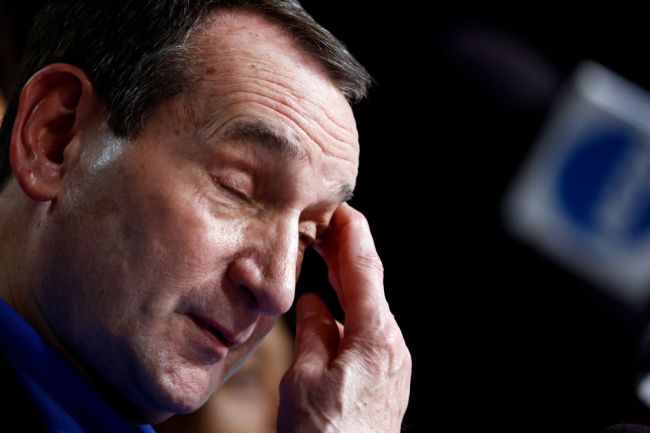 Some people get fairy tale endings to their careers. Some go out with disappointment. Mike Krzyzewski went out with an absolute nightmare.

It was all scripted so perfectly. Duke was two wins away from him going out on top. One of those two wins would have given him revenge against the rival that ruined his last home game. Alas, it was not meant to be as North Carolina beat Duke by four in the Final Four.

Coach K losing to the North Carolina in his final game is an event that has drawn reactions from all around the world of sports. Some wanted to take time to recognize his immensely successful career. Others are reveling in the way his final season has had two of its biggest moments ruined by his greatest rival.

This will forever be a feather in UNC's cap in this rivalry. Something that can never be undone. First NCAA Tournament win in the rivalry and ended Coach K's career.

A game for the ages. You couldn't write a more gripping script. A coaching legend in his final act. A storied rivalry has another improbable chapter. Congratulations to both teams. UNC continues it's improbable run. But Duke should feel great pride. They did Coach K proud.

The ultimate plot twist is after the media spent an entire year crafting a narrative arc around Coach K, the 2022 NCAA Tournament protagonist turns out to be Roy Williams. pic.twitter.com/n9TiVtJVM1

I'm always going to remember that time that Coach K had an ESPN-sponsored retirement tour and North Carolina handed him his last two losses at home and in the NCAAT. Good times.

Carolina ain’t gonna never let Duke live this down. Beat Coach K his last game at Cameron AND in the Final Four in his last game ever?!?! That’s the Draw 4 x UNO Out combo.

Coach K should come back for another year. It can’t end like this. It should end on a perfect note: another embarrassing loss, but next year.

I’ve known Mike Krzyzewski and his family for 34 years. He is a fierce competitor who never lost sight of what is really important in life. A molder of young men and a true example or what servant leadership is about. Thanks Coach K for all your contributions to this great game.

Regardless of your personal feelings about Duke, What Coach K has done for the game of basketball is immeasurable….Love and respect to him and his family. The game is better because of you!

Remember Coach K told fans after Duke's loss to UNC that "the season's not over?"

He was right. They had to lose to UNC one more time.