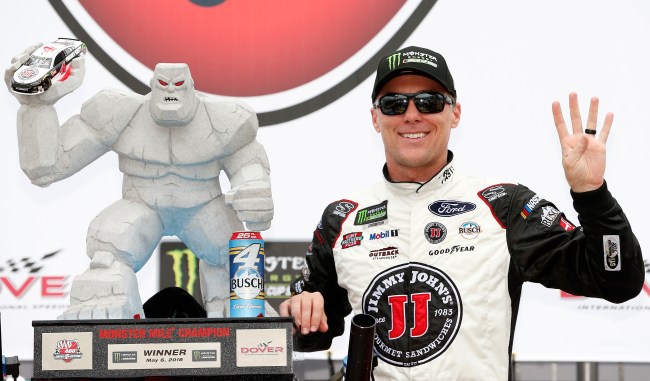 DOVER, DE - MAY 06: Kevin Harvick, driver of the #4 Jimmy John's Ford, poses with the trophy after winning the Monster Energy NASCAR Cup Series AAA 400 Drive for Autism at Dover International Speedway on May 6, 2018 in Dover, Delaware. (Photo by Brian Lawdermilk/Getty Images)

The France family, majority owners of NASCAR, has hired Goldman Sachs Group to “identify a potential deal for the company”, including the sanctioning body. An aging fan base (58, only golf, tennis and horse racing older), depressed race-day attendance (ISCA reported -1.6% YoY decline in ‘17), steadily declining TV ratings (9/10 races this season have fallen to all-time or decade-plus lows) and minimal “star-power” (see: Dale Jr. retirement) have raised concerns about sport’s long-term viability, which may explain why the France family is looking to sell after 70 years. No valuation has been established for NASCAR, though the company is expected to fetch several billion dollars; for reference purposes, Liberty Media Corp. acquired Formula One (FWONA) for $8 billion+ (included assumed debt, though no tracks were included) in Jan. ‘17. Sources have cautioned that talks remain in the exploratory stage and that no deal is imminent.

Howie Long-Short: NASCAR television ratings are down from their mid-2000 heyday, but it’s important to consider that the sport continues to put up impressive viewership numbers on Sunday afternoons. The spring race at Talladega last week saw TV viewership decline 20% YoY and it still drew 4.7 million viewers. It also must be noted that NASCAR has finished as the No. 1 or No. 2 sport (in terms of consumption) during 8 of the first 10 weekends of the ’18 season.

Fan Marino: Those who say NASCAR needs a new “face of the sport” (to take over for Dale Jr.), should consider Kevin Harvick. Harvick won a rain-interrupted race at Dover on Sunday, his 4th checkered flag of the season (11 races, 8 Top 5 finishes). He led 201 of the 400 laps at the Monster Mile, taking a lead he would not relinquish with 62 laps to go. The win was the 41st of Harvick’s career, placing him 18th all-time. Only Kyle Busch (46) and Jimmie Johnson (83) have more amongst active drivers. Check out what Harvick did for his fans, before the race; there is no better ambassador within the sport.

Looking for a fresh face? There are several to choose from. 7 of the Top 15 best-selling drivers at retail (i.e. the track) are under the age of 30 and sales of their merchandise is up 74% YoY.

FanDuel Confirms Plans to “Get into Sports Betting”, Verizon Flying Under Radar

FanDuel CEO Matt King confirmed in an interview with Fortune that should SCOTUS strike down PAPSA, the company would “get into sports betting.” The announcement comes just two weeks after the NBA said it would look to divest equity interest in the DFS operator and 2 months after news broke that the company was in “advanced talks” to partake a reverse merger. It was suspected at the time, that the company would use a capital infusion to position itself to capitalize on legalized sports betting. No updates have been released as it relates to negotiations.

Howie Long-Short: We told you on April 23rd, that the NBA divesting its interest in FanDuel was the latest sign of the company’s intention to pursue legalized sports betting. The NBA has been outspoken about its desire for an “integrity fee”; they can’t sell an increased role in regulation and serve as the book, with an interest in winners/losers.

While not too late (a decision may not occur until the end of June), FanDuel has some catching up to do. As we’ve noted over the last several months, rival DraftKings has been aggressively positioning itself (increased staff by 75%, hired Head of Sportsbook, seeking casino partners) for a similar pivot; and DRAFT, owned by Paddy Power Betfair (PDYPY), is also expected to chase a share of the U.S. sports gambling market. Those 3 new entrants will face strong competition from established gaming operators like William Hill (WIMHY), Caesars Entertainment (CZR), MGM Resorts International (MGM), Penn National (PENN), Boyd Gaming (BYD), etc.

Fan Marino: There’s another potential new entrant to the sports betting space, well positioned and flying quietly below the radar; Verizon Communications (VZ). The company owns Yahoo! (AABA) and its popular season-long fantasy sports business (they also have DFS, though less users than DraftKings and FanDuel) and like those companies (and Draft), could convert tens of millions of players into gamblers. VZ also owns both NFL and NBA streaming rights, giving them the ability to broadcast games and offer in-game betting within the same application; a significant advantage over the competition.