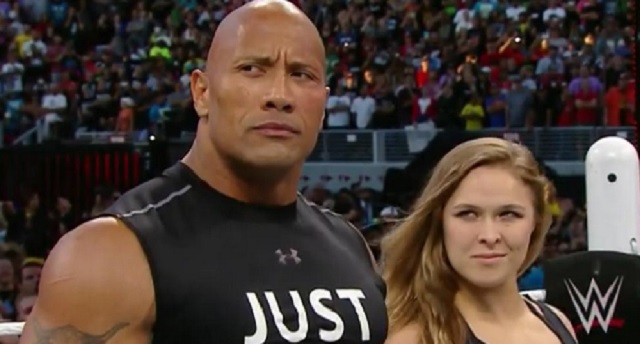 Rumors are circulating the Ronda Rousey has been learning the basics of pro wrestling and will be joining the WWE; taking part in at least 2 high profile matches over the next 6 months. Rousey was recently filmed attending the WWE’s Mae Young Classic tournament and recently cut her first promo challenging Charlotte Flair. The most likely scenario at this point is that Rousey will take part in a Four Horsewomen vs. Four Horsewomen match (WWE vs. UFC) at Survivor Series and then either Stephanie McMahon (Vince McMahon’s daughter) or Charlotte Flair (Rick Flair’s daughter) at WrestleMania.

Fan Marino: Apparently, the WWE is looking to bring the Undertaker back to wrestle John Cena at Survivor Series. It’s hard for me to be excited about the future of WWE as a company, when two of their biggest draws are 52 and 40, respectively. Brock Lesnar, another huge draw, is also 40. At some point, they need to find young talent who can move the needle.

Nike (NKE) has begun to implement GrabIt robots that utilizes the cling of static electricity, to produce sneakers in both Mexico and China. The robots, designed to stack fabric, can precisely stack and fuse the upper parts of a sneaker in in 50-75 seconds; work that would take a human 10 minutes to complete. Within an 8-hour shift, a machine monitored by a single employee can produce between 300-600 pairs of shoes. GrabIt’s electroadhesion technology is so diverse, it can handle an egg, soft fabric or a 50lb. box. Shirt manufacturers are already lining up to purchase the GrabIt robots that can do collars and cuffs, scheduled to be released next year.

Howie Long-Short: While GrabIt remains a privately held company, Nike (NKE) is a minority investor, having participated in their Series A round 4 years ago. The company estimates that the apparel industry is a $200-$300 million market for robotics makers, but sees e-commerce as an even bigger opportunity. GrabIt sells software guided electroadhesive conveyer belts for urban warehouses.

Fan Marino: I am fully supportive of any endeavor that would reduce/replace the cheap labor found in Asia with higher quality/paying jobs in the U.S.

Churchill Downs (CHDN) is making changes to its “Road to the Kentucky Derby” Championship Series; adding a path to the race for European horses, as it looks to stimulate international interest in the 2018 race presented by Yum! Brands (YUM). The “European Road to the Kentucky Derby” will consist of 7 races, with the horse accruing the most points winning an invitation to the race. Last year, CHDN introduced a path for dirt racing horses based in Japan, to participate in the fastest 2 minutes in sports.

Howie Long-Short: Horse racing is one of 4 sports that can be legally gambled on in Japan and as of 2016, that includes on foreign races. In 2015, the country waged $22.5 billion on the ponies and CHDN wants some of that juice. Expanding the Japanese series is only going to get that audience more invested in May’s run to roses.

Sony (SNE) has announced it will be releasing a new shock proof, crush proof, action camera to compete with GoPro (GPRO). The 1.0 inch 15.3 MP RX0 should deliver superior image quality, as its sensor is bigger than any of GoPro models currently available. The camera shoots video in 4K, is waterproof up to 10 meters and captures slow motion at up to 960 frames/second with a resolution of 1920x1080p, a feature not typically found in a camera priced under $1,000. The RX0 will cost $700 and is expected to ship in October.

Howie Long-Short: GPRO is facing strong competition from Sony, Canon (CAJ), Apple (AAPL) and Samsung (KRX: 005930) in the action camera space and still managed to grow revenues 34% YOY in Q2 ’17. They have the #2 selling drone brand in the U.S., a pilot going for a device designed to capture fully immersive VR content and a mobile editing app that has seen usage increase 112% YOY. I don’t see the RX0 putting a damper on GPRO’s recent momentum.

Fan Marino: The GoPro Hero5 Black is $399. It is roughly the same size as the RX0. For $50 (case) it’s nearly as durable. The control options are slightly different, but each has their benefits. The big difference is the slow-motion capability on the RX0. Is that worth $300? Not for me.

The defending Champion Golden State Warriors have inked the league’s largest advertising patch deal, signing a 3 year $60 million agreement with Rakuten (OTC: RKUNY); twice what Goodyear (GT) will pay Cleveland (league’s 2nd largest deal). As part of the deal, Rakuten will also have naming rights to the teams practice facility and receive 6 other designations (i.e. the official e-commerce partner), that span longer than 3 years. Golden State had stated it was crucial they partner with a worldwide brand, to grow their global vision. The Apex Marketing Group, a sponsorship evaluation firm, has estimated RKUNY could expect to receive $32-37 million worth of exposure from the sponsorship this season.

Howie Long-Short: Rakuten, a Japanese company that owns Ebates, Viber & Kobo, is betting on a future without apps. Their gaming company, Rakuten Games, delivers titles that can be played on web browsers; as opposed to requiring installation on phones or PCs. RKUNY sees a $50 billion mobile gaming market and wants a slice. With 114 potential users in its database, I wouldn’t bet against them taking it.

Fan Marino: This is the 2nd major sports marketing partnership that Rakuten has signed within the last 60 days. The company is paying $262 million (4 years) for the rights to have their name appear across the chest of FC Barcelona jerseys. It is now a matter of when the other U.S. pro sports leagues (NFL, MLB, NHL) will implement jersey sponsorships. There is far too much money being thrown around, for those league’s owners to sit idly by.