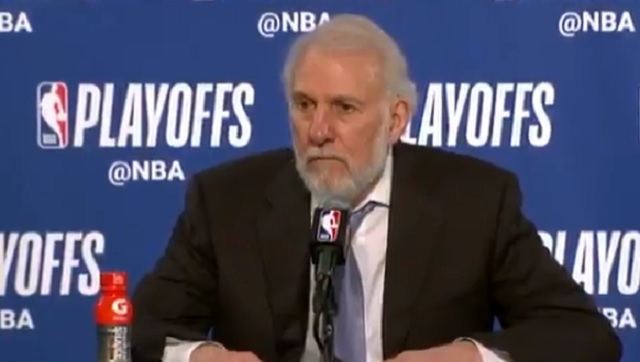 The San Antonio Spurs have been embroiled with some bizarre drama all season with their star Kawhi Leonard, who refuses to return to play after he suffered right quadriceps injury in the playoffs last year despite being cleared medically by the team. Leonard is currently in New York getting rehabbed by his personal medical team while the Spurs are getting crushed by the Warriors in the playoffs.

After last night’s game 2 loss, Spurs coach Gregg Popovich heaped praise on center LaMarcus Aldridge for playing through adversity all season which many saw as a dig towards Leonard.

LaMarcus has been a monster all year long. He’s led our team on both ends of the floor. He doesn’t complain about a darn thing out on the court. He just plays through everything. I can’t imagine being more proud of a player as far as playing through adversity and being there for his teammates night after night after night. He’s been fantastic.

“LaMarcus has been a monster all year long.”

Gregg Popovich after LaMarcus Aldridge scored 34 points in the @spurs loss to the @warriors. pic.twitter.com/RB6ThB7gJi

Leonard is currently in line to receive a super max contract extension over the summer and is apparently not willing to risk aggravating his injury before he gets paid. We’ll have to wait and see if the Spurs end up trading Kawhi in the offseason or offer him the super max despite all the drama he put them through.