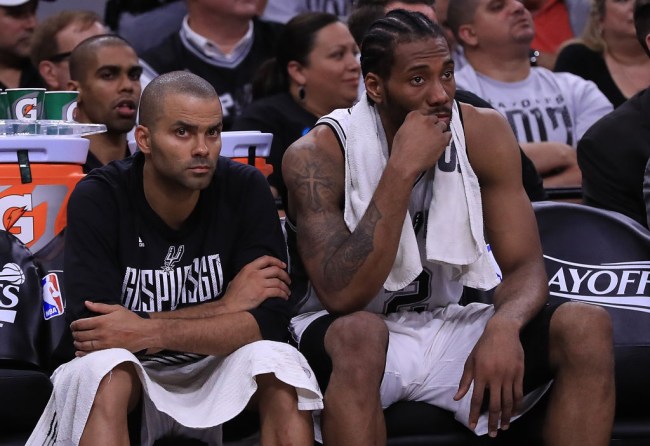 Back in March there were reports that Kawhi Leonard was angry with Spurs’ team doctors for misdiagnosing his quad injury. A few weeks after the report, Leonard’s teammate Tony Parker came out publicly to tell Kawhi to basically chill and listen to the Spurs doctors.

Tony Parker on his return from the career-threatening quad injury he suffered last May: I’ve been through it. It was a rehab for me for eight months. Same kind of injury (as Kawhi), but mine was a hundred times worse. But the same kind of injury. You just stay positive.”

Tony also said he never considered getting a second-opinion after he tore his quad: “I could have gone anywhere, but I trust my Spurs doctors. They have been with me my whole career. They know my body better than anybody…I feel like we have the best medical team in the world.”

Tonight, ESPN is reporting that one of the reasons Leonard doesn’t want to return to the Spurs next season is because he’s still “irate” at Tony Parker over his public comments from March.

Leonard had told confidants that he did not want to sit down with Popovich and has been purposely difficult for the Spurs to reach recently. Among the issues, Leonard is angry over what he believes was the Spurs’ mishandling of a quad injury, and remains irate with public comments from teammate Tony Parker and Popovich that he felt were not supportive of him, league sources said.

Spurs fans on Twitter immediately turned on Tony Parker and bashed him for instigating the whole Kawhi situation.

Tony Parker is garbage and I want him off my team

Goodnight to everybody except Tony Parker

Fuck @tonyparker he should’ve retired a long time ago he should retire or leave to another team Derrick White has so much potential that’s taken up by Tony’s old run down ass with that being said #GoSpursGo https://t.co/U8oe1j3W6k

Honestly? I’ve been mad at Tony Parker since he cheated on Eva Longoria