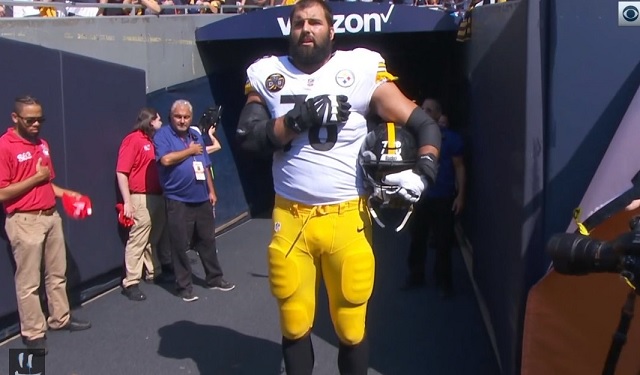 Today, Steelers coach Mike Tomlin told CBS Sports that his team was going to stay in the locker room during the national anthem to try to exclude themselves from all the political discussion surrounding Donald Trump’s latest comments on the subject.

Steelers head coach Mike Tomlin reveals to @JamieErdahl that the team will not be participating in today's national anthem. pic.twitter.com/5zihPWQsMv

We’re not going to play politics. We’re football players, we’re football coaches,” “We’re not participating in the anthem today – not to be disrespectful to the anthem, but to remove ourselves from the circumstance.

Nearly the entire team did indeed stay in the locker room during the anthem except for offensive tackle and former Army Ranger Alejandro Villanueva who decided to stand in the tunnel while the anthem played.

No Steelers were on the sideline during the anthem.

LT Alejandro Villanueva, a veteran who served in the Army, stood near the tunnel. pic.twitter.com/JOviLUAtiF