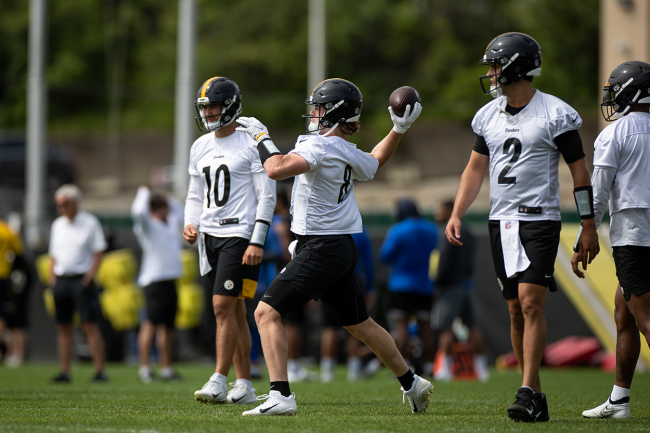 Based on the most recent update to the team’s depth chart, it seems like Mason Rudolph is the odd-man out.

After the Steelers’ first depth chart was released, there was a lot of hullabaloo made about first-round rookie Kenny Pickett’s position. He was listed third behind Rudolph and QB1 Mitchell Trubisky.

Rookies are typically listed at the back of the first depth chart, so it wasn’t a huge surprise. And he is already moving up.

Tuesday’s depth chart, the second of training camp, listed Trubisky as QB1 and Pickett as QB2. It is likely to stay that way into the regular season, barring a drastic drop off from Trubisky or a significant jump from Pickett. Or both.

No matter what plays out, it seems as though Rudolph will be at a loss. He is likely going to finish third in the quarterback battle.

As a result, a former NFL General Manager believes that the former Oklahoma State quarterback will be traded very soon. It could come in the next few days.

Either way, trade or not, Rudolph is seemingly the low man on the totem pole. Meanwhile, Pickett is lighting it up in the preseason.

During his NFL debut over the weekend, the former Pittsburgh Panthers signal-caller went 13-of-15 passes for 95 yards and two touchdowns. He looked great.

Although his performance certainly helps, offensive coordinator Matt Canada told The Athletic that Pickett’s play was not the reason for the depth chart move.

“Yeah, we’ve got a system in place,” Canada said. “Coach, we’ve had this thing mapped out since I don’t know when. We’ll continue to stay right on our plan and see where it goes. But how you play does matter. I don’t act like we’re just going to stick to it no matter what happens. Don’t pencil me into saying something like that. But we have a plan, and until something drastically changes it, we’re going to continue to methodically go through our plan as we see it. Obviously, there’s unbelievable urgency every day.”

As of right now, it seems like Trubisky will be 1, Pickett will be 2 and Rudolph will either be traded, cut, or on the back of the roster as a ‘break in case of emergency’ option. Likely one of the former two options.