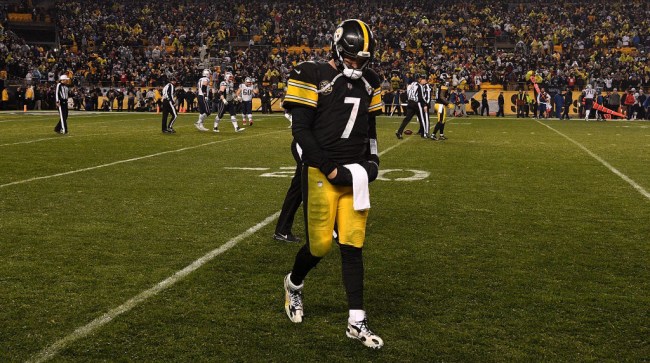 After Ben Roethlisberger’s ill-fated attempt to fake spike the ball at the end of the Steelers game versus the Patriots resulted in a crushing interception, fans of the team decided to take out their frustration and with a brutal attack on Roethlisberger via Twitter.

One problem though. The Steelers fans actually attacked some random guy on Twitter and not the Pittsburgh Steelers quarterback. Whoops! (Perhaps they still weren’t thinking clearly after the referees took away their game-winning touchdown with the “it’s a catch, but not really” rule.)

Here’s the inexplicable play by Roethlisberger that sealed the game for the Patriots on Sunday.

And here’s Roethlisberger trying to make the inexplicable explicable.

Ben Roethlisberger says there was a difference of opinion on #Steelers final play. "It wasn't a fake spike. I was yelling 'clock it' b/c I felt that was the thing to do, to clock it and get yourself one play. And it came from the sideline: 'Don't clock it, don't clock it.'"

Regardless of whose fault the fake spike play was, Steelers fans were pissed.

Ummm, you got the wrong guy, folks…

@BenRothenberg You suck as a Steelers quarterback. Retire at the end of the year and get out.

Choke on that!! Your no Dan Marino @BenRothenberg @steelers
Nice win @Patriots

Ok I see you wanna “catch them off guard” but with a slant? And you waited to long.. just throw it away… you’re smarter than that @BenRothenberg

Ben Rothenberg is starting to play like Maddox and Tomczak just trash.. wtfwyt? Dumb shit.. who paid you off????

I wish @BenRothenberg would have followed his original idea of spiking the ball.

Just throw it away next time, Ben

Not big bens fault no one else was tried to get open, I seem like no one else knew the play.

@BenRothenberg Don’t throw coaches or teammates under the bus, you know better than that; besides you could’ve thrown it out of the end zone (assuming you still had enough arm strength left).

And those weren’t even the worst tweets at poor Ben Rothenberg. He got accused of being a sexual predator even before Big Ben threw his pick.

Luckily for him, not everyone can’t tell the difference between Rothenberg and Roethlisberger.

I love all that name calling yet can't even get the tag right.

But you're still his favorite quarterback, tho.

This is embarrassing on several levels as a Pittsburgher. Mostly for our schools though.

And one even apologized…

@BenRothenberg my apologies. A little to enthusiastic to check the @.

@jonjones I think someone needs your help