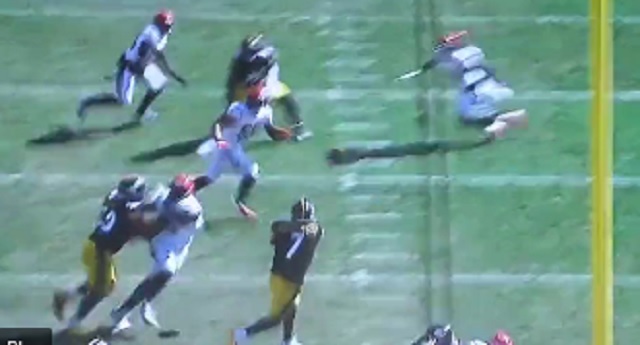 Ben Roethlisberger is having some issues this season and it seems like fans are fed up.

Before the Steelers game on Sunday, CBS’ Jason La Canfora reported that there were concerns within the organization that mounting injuries have caused Roethlisberger to slow down.

Ben Roethlisberger will play through pectoral discomfort this week as he and Pittsburgh’s slumping offense try to get going against the Bengals. But the former All-Pro has continued to look old and near the end, according to several execs who have broken down his film, and concern is mounting within the organization as well given the limitations of this offense thus far.

Even Roethlisberger’s most staunch supporters within the Steelers’ organization have privately raised some concern, as the future Hall of Fame quarterback has dealt with injury issues for several years now, and his productivity has been waning for quite some time. Roethlisberger, who took a considerable paycut to remain with the Steelers for 2021, is also lacking anything close to the supporting cast he enjoyed during his peak years.

In the third quarter of the Steelers game against the Bengals. Roethlisberger threw an absolutely terrible interception directly into a Bengals defender’s hands.

Another play showed Roethlisberger bizarrely falling to the ground in the backfield.

Big Ben is as mobile as a tree pic.twitter.com/WHawz659Rz

Things got so bad that Steelers fans were calling for Big Ben to get benched by Mike Tomlin.

I know it sucks, but it’s time to bench Ben, I don’t think a rookie throws that bad of a pick

It's time to start asking when Mike Tomlin will have the stones to bench Big Ben? He makes the team worse.

I love the @steelers , but y’all gotta bench Ben.. it’s over for him

Enough is enough. Bench Ben Roethlisberger. This is a complete embrassment. Mason Rudolph simply can't be any worse than this. How did Mike Tomlin not see this coming? Franchise is turning into a joke. #steelers #bigben