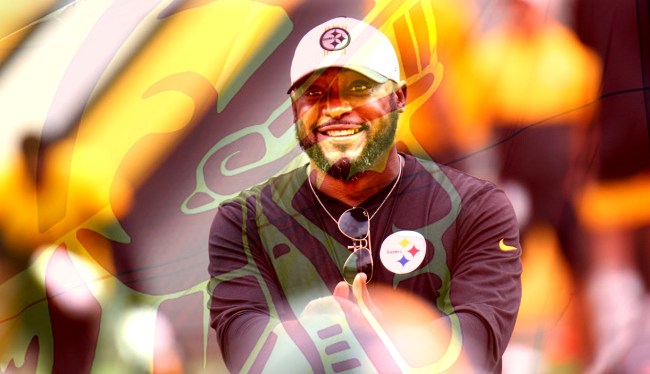 When Patrick told Palmer that his reveal was the first he had heard about Tomlin being a potential candidate for the USC head coaching job Palmer replied, looking very uncomfortable, “Uh oh.”

Later, the media, of course, asked Tomlin if he was considering leaving Pittsburgh to take over at USC and he wasn’t thrilled with the question.

“There’s not a booster with a big enough blank check,” said Tomlin about the USC job.

Fast forward one week, following the Steelers’ 15-10 win over the Cleveland Browns on Sunday, and All-Pro defensive tackle Cameron Heyward informed Rich Eisen that some of his Steelers teammates have been trolling their head coach by rocking some USC gear at practice.

“Coach T is locked in and he’s not looking for a quick out,” said Heyward on Monday. “He thinks he has the greatest job and we know it every single day. He appreciates every moment.”

“So when you say it didn’t land in the locker room, nobody was talking about it? Nobody had to hear what Tomlin had to say? Or that does not come up?” asked Eisen.

“Now, we do our own things where we like to screw with Coach T,” Heyward responded. “Whether it’s Ben wearing USC gloves during a meeting… [laughter] Ben wore his USC gloves in a media interview. You know, there’s subtle things we do here and there. I think one time we were going to play the USC song during our warm-up, but I think that got nixed pretty quick.”

Are those USC gloves, maybe borrowed from JuJu Smith-Schuster or Zach Banner? And was Ben Roethlisberger poking a little subtle fun at his head coach in response to this week’s absurd overreaction on just about everyone’s part, including Mike Tomlin? If so, well played by the QB. pic.twitter.com/lZHk8hWepm