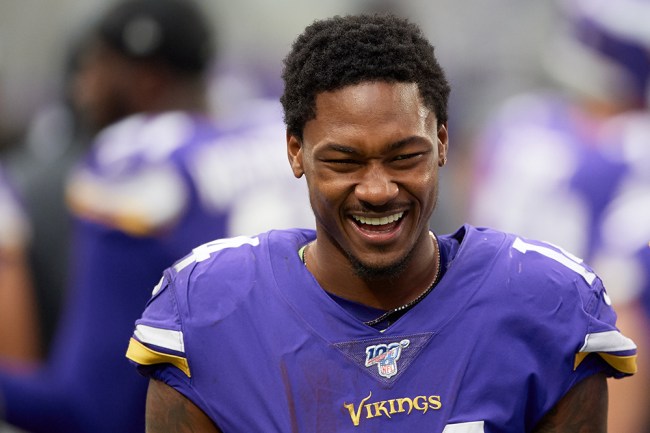 Stefon Diggs has been among trade rumors for weeks now ever since he deleted all of his Vikings related content from his Instagram. He also tweeted the simple message of ‘life’s too short’ which threw a bit more gas on the fire.

In his latest stunt, the wide receiver posted a workout video of him rocking an Arizona Cardinal shirt on Wednesday.

As we pointed out after his strange activity on Instagram, Diggs is treating his current team like a cheating ex.

Diggs is entering the second year of a five-year, $78 million deal with the Vikings after catching 63 passes for 1,130 yards and six touchdowns last season.

Arizona is also a team that isn’t necessarily loaded at the wideout position and like plenty of other teams around the league would welcome Diggs to the fold with open arms.

As Vikings beat writer Ben Goessling pointed out on Twitter, Minnesota isn’t due to pay the final $5 million of Diggs’ $15 million signing bonus until March 15.

It wouldn’t make much sense for the Vikings to deal one of the most explosive receivers in the league, but if it gets to the point where Diggs hits a level of unhappiness where he demands a trade, Minnesota shouldn’t have too much of a problem finding him a new home.