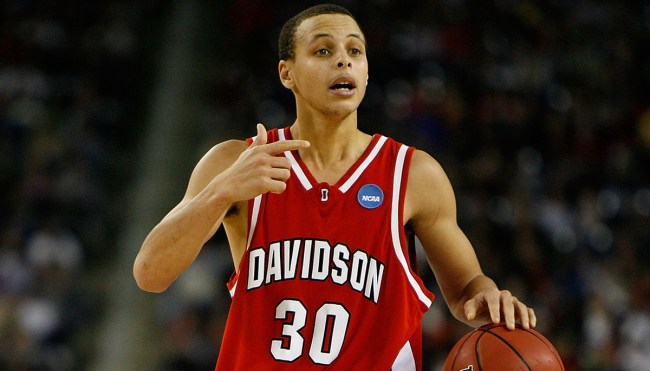 In 2008, a sophomore named Steph Curry took the basketball world by storm when he led a Davidson team that hadn’t won a March Madness game in 39 years on an improbable Cinderella run that brought the Wildcats all the way to the Elite Eight, where they narrowly lost to the Kansas Jayhawks team that would end up cutting down the net at the end of the tournament.

His unreal performance made it obvious Curry was a force to be reckoned with. It’s hard to imagine many people predicted he’d evolve into the superstar he’d become after he took his talents to the NBA following his junior campaign, but the teams who played him during his final season at Davidson headed into every contest tasked with figuring out a way to keep him in check.

It’s safe to say no school went to greater lengths to shut the guard down than Loyola during an almost mythical game that took place on November 25, 2008. Sure, the Greyhounds ultimately lost the matchup by a score of 78-48, but it still made national news thanks to the unconventional strategy the team deployed: double-teaming Curry over the course of a game where he was held scoreless after attempting a mere three shots.

The YouTube channel HoopVision recently decided to do a deep dive into the game, but initially ran into a bit of an issue after discovering footage of the showdown has seemingly been lost to time aside from a few clips that ran on a Pardon the Interruption segment that ran in its wake.

However, after reaching out to the director of basketball operations at Davidson, the channel managed to get its hands on the video. As a result, we have our first-ever look at what went down and, well, it’s about as absurd as it sounds.

As you can see, Loyola opted to put two defenders on Curry from the opening tipoff regardless of whether or not he had the ball. As I mentioned above, it was a phenomenal tactic when it came to shutting down Davidson’s best player.

However, it also allowed the Wildcats to essentially play four-on-three for the entire game, so it was a less phenomenal tactic to employ if the goal was to not lose by 30 points.