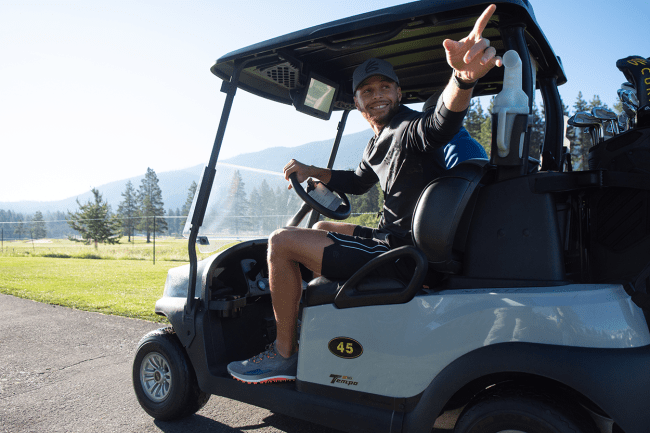 Steph Curry never misses from deep. Whether it be on the basketball court or the golf course, the 34-year-old reigning NBA champion doesn’t miss.

As has become tradition over the past few years, Curry is out in Nevada this weekend. He and a field of other celebrities and athletes both young and old are competing in the American Century Celebrity Golf Championship Tournament.

The Championship, held at Edgewood Tahoe Golf Course in South Lake Tahoe is a three-day, 54-hole tournament that includes modified Stableford rules. Scoring is as follows: 10 points for a double eagle, 8 points for a hole in one, 3 points for a birdie, 1 point for par, no points for bogey, and minus 2 for double bogey.

Curry has not won yet, but he always seems to be in contention. He’s a heck of a golfer.

On Thursday, during the practice round, Curry showed off his power during the long drive competition.

On Friday, during the first round, Curry showed off his wicked touch by holing-out for an eagle on the Par-4 13th hole. It was impressive.

After setting up from 97 yards out, he hit an iron just past the hole onto the green. After sticking his shot inches past the cup, it bounced once and started to roll back. And then it kept rolling until — BOOM — it went in. Curry was pumped, take a look:

WOW!@StephenCurry30 is used to hitting shots from downtown, but this one was from 97 yards out! @ACChampionship pic.twitter.com/bCpAajysrs

Although there is still a long way to go, Curry’s eagle on 13 will help him stay within range for the second round on Saturday. What a shot!