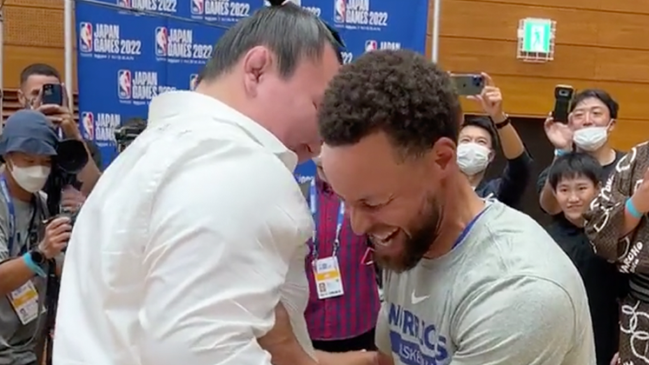 On Friday, the NBA will continue in its quest to Grow The Game around the world when the Warriors and the Wizards face off at Saitama Super Arena in Japan for a back-to-back preseason showdown slated that will wrap up over the weekend.

Earlier this week, Steve Kerr and Co. hopped on the 11-hour flight that took the team from the Golden State to Tokyo, and after touching down, they got plenty of opportunities to take in some of the country’s culture while gearing up for the upcoming contest—which included a meet and greet with a legendary local who put a couple of star players in their place.

During a media event prior to the preseason showcase, Steph Curry and Klay Thompson each got the chance to go one-on-one with Hakuhō Shō, who retired in 2021 and is widely considered the greatest sumo wrestler in history thanks to a 20-year career where he set the all-time match win record by racking up a victory in 1,187 individual bouts, won 45 tournament championship’s in the sport’s top division, and became the 69th yokozuna (the highest rank that can be achieved in sumo).

While it’s been a year since his final match, it’s very clear the 6’4″ 37-year-old who weighed upwards of 350 pounds in his prime hasn’t lost his touch based on what unfolded when Curry and Thompson tried—and spectacularly failed—to make him lose any ground after they each got the chance to try to push him back.