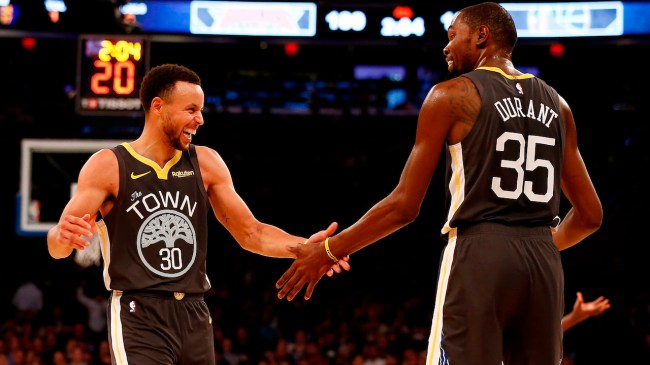 If you thought that Kevin Durant was going to stop talking about the Golden State Warriors and responding to random schlubs on Twitter just because he’s found a new — as the Wall Street Journal calls it — “headspace”, then you obviously don’t know much about Kevin Durant.

Earlier in September, Durant — clearly more than willing to rehash the recent past– did an in-depth interview with the Wall Street Journal where he revealed that he felt he never had “full acceptance” in Golden State, whatever the hell that means:

“As time went on, I started to realize I’m just different from the rest of the guys. It’s not a bad thing. Just my circumstances and how I came up in the league. And on top of that, the media always looked at it like KD and the Warriors. So it’s like nobody could get a full acceptance of me there.”

And again, nobody is gonna take away the accomplishments we had. But at the end of the day, whatever he, you know, needed to do to make that decision and however he wants to explain that — that’s just what’s gonna happen.”

If you’re Steph Curry, Durant’s passive-aggressive bitchiness has got to be frustrating at some point, as it was quite literally their acceptance of Durant that allowed the former Oklahoma City Thunder forward to win two championships in three years with the squad.

To be fair to Durant, though, the joke made by Warriors general manager Bob Meyers at the team’s 2018 NBA Championship parade was an absolutely asinine comment to make at that moment and was likely the mental and emotional turning point for KD.