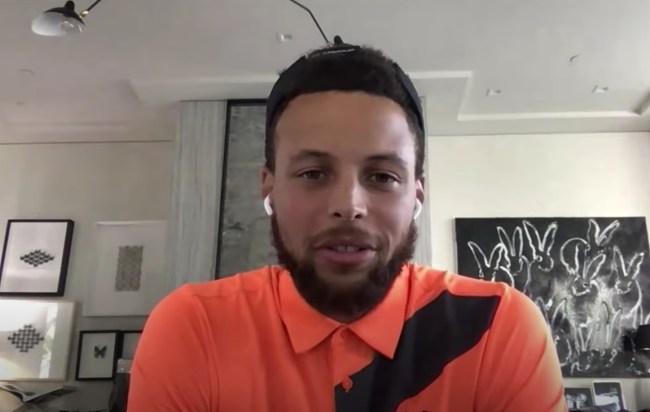 Former Davidson Wildcats superstar Stephen Curry was a guest on Jimmy Kimmel Live this week where he tuned in remotely (from home) to speak with Jimmy about life over the past few months, Michael Jordan, mini-golf and more.

Steph Curry‘s been at home watching ESPN’s The Last Dance on Sunday nights just like everyone else in the sports world. Kimmel asked him about this and it was interesting to hear Curry talk about how the Golden State Warriors recently turned down an opportunity to have cameras in the locker room filming a similar-style documentary.

The Warriors have made five NBA Finals appearances in five years and that would certainly make for a compelling documentary down the line. I’m sure they’ll be able to eventually splice enough footage together from interviews with locker room footage if they want to make it happen but for now, Curry thinks that keeping the cameras away was the right decision. He also showed off an excellent golf trick shot that took a little while but he was able to pull it off.

“When we were going through these five Finals runs the last five years, our last year we turned down an opportunity, I believe, to have cameras follow our last season,” Curry said. “I think that was the right decision.”

As pointed out over on Bleacher Report, Golden State coach Steve Kerr who appears in Jordan’s The Last Dance mentioned a while back that filming something like this is basically signaling that it’s the beginning of the end and that’s a poor message to send the fans:

“You’re basically telling your players that you believe this is ending, and also you’re violating a principle of the sanctity of the locker room,” Kerr told The Athletic’s Sam Amick. “So it never occurred to me, nor does it now, to do anything of the sort for our team.”

It will certainly be interesting to see what a healthy Golden State Warriors team is able to do next season, or this season if things resume, and how history will paint the picture of that team.