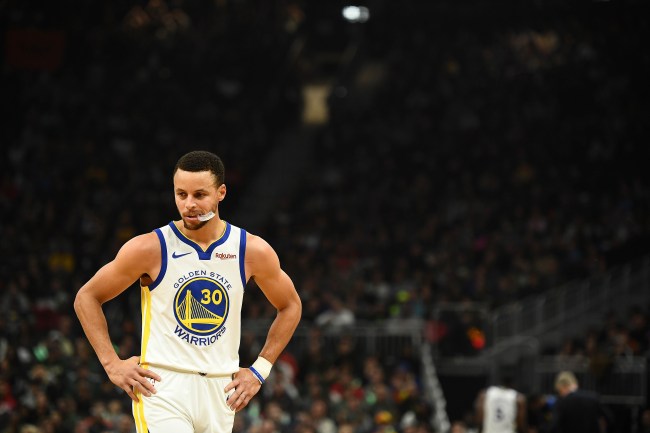 The NBA has a problem with conspiracy theories. Kyrie Irving has been explaining himself every week since he claimed the earth is flat after he went down a rabbit hole of watching YouTube videos. Now, Golden State Warriors superstar Steph Curry has proverbially stepped in it after appearing on Vince Carter and Kent Bazemore’s Winging It podcast this week.

During the podcast, Steph Curry denied that humans have ever been to the moon. He basically flat out called the moon landing a fake and implied that it was a government conspiracy.

Steph Curry went to Davidson College in North Carolina which is a really good school. It’s an institution full of intelligent students and it’s pretty damn hard to get into. Steph is an intelligent individual so for him to say this bullshit is pretty unprecedented.

During the segment, Steph asked the others “We ever been to the moon?” to which they responded “Nope.” Steph Curry then said “They’re gonna come get us. I don’t think so, either.” In that last part, saying he agrees that we haven’t been to the moon and ‘doesn’t think so’ with respect to whether or not astronauts have actually been to the moon.

Not just Steph but Kent Bazemore, Vince Carter, and Andre Iguodala all agreed, it's possible the entire NBA are moon landing truthers https://t.co/QbqiO7IfS1

NASA landed ANOTHER damn probe on Mars last week. We’ve been to the moon MANY times. These guys are trolling and they’re being called out for it. That, or they’re somehow deluded into thinking the world is some massive conspiracy theory.

Everyone on Twitter had a response to Steph Curry, a Davidson educated individual saying he doesn’t think we’ve ever been to the moon.

I'm just going to go ahead and interpret the "We" he is referring to as the Golden State Warriors. I agree, they did not go to the moon. https://t.co/aqGpWNsQGI

Kyrie Irving is sending a bunch of thank you texts to Steph today https://t.co/qi2cwJNIcp

This person’s got the worst take so far.

Steph Curry's take that the moon landing was faked is a lot less preposterous than Kyrie's assertion that the Earth is Flat.

that's not to say i agree with Curry, but that comparison is some false equivalence.

Someone speaking the truth here:

.@StephenCurry30 calling into question the greatest accomplishment in human history does such an incredible disservice to the men and women who sacrificed so much to get us to the moon. It's incredibly irresponsible for someone with your platform to ignore facts like this.

You're stance on the moon landing is like someone saying you didn't win 2 MVP awards. It's ludicrous because we can prove you did, in fact, win those awards. Just like we can prove we landed on the moon. It's soooooo irresponsible, and if it's a joke, PLEASE say so

Can't wait for the Steph Curry – Dude Perfect video where he's raining three's from the moon.

Y'all being set up.

I think we can all agree that Steph Curry agrees to be dragged for this take from now until forever. Anytime he picks up a microphone in front of reporters they need to ask him why he is spreading misinformation to the children across America that idolize him.