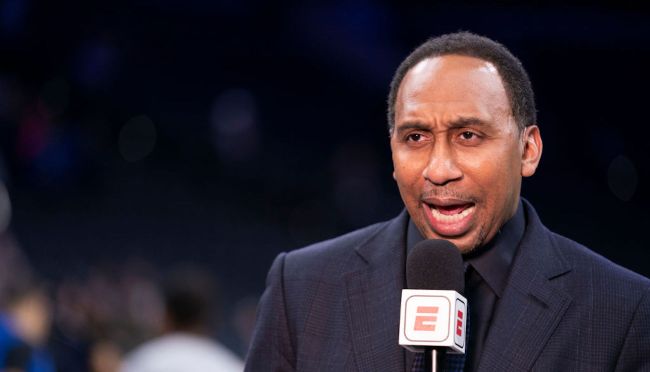 Everyone probably has different moments come to mind when thinking of Stephen A. Smith’s hottest takes over the years given the sheer volume of absurd things the man has said.

Well, on Tuesday, Smith put a first-ballot hall of fame hot take into the world while discussing Anthony Davis.

First and foremost, you know it’s a slow news day when ‘Is Anthony Davis a top-7 player in the NBA when healthy’ a topic of debate on ‘First Take,’ but it’s often the slow days when Smith delivers his wildest stuff.

Smith delivered, to say the least.

Debating with J.J. Redick and Amare Stoudamire, Smith emphatically explained that Davis is a Top 7 player when healthy and that he’d take him over four certified superstars in the league.

“I’d take [Anthony Davis] over Luka. I’d take him over Jokic,” Smith began. “And as much love and respect and reverence as I have for Jimmy Butler, and Jayson Tatum, and how big time I believe both of them are…I’d take a healthy Anthony Davis over them too.”

.@stephenasmith defends his argument that AD is a top-7 player in the NBA when he’s healthy.

Davis is among the best players in the NBA when healthy, but he hasn’t been healthy in two years having played just 76 total games the past two seasons.

The topic of debate is ridiculous given the fact that Davis can not stay healthy, but not as ridiculous as Smith saying he’d take the Lakers big man over Doncic and Jokic.

there's a reason it's not called Best Take https://t.co/t8DexSNw9L

SAS needs the off-season more than anyone in the Finals tbh https://t.co/jablcZNpAz