Stephen A. Smith’s Crucifixion Of Antonio Brown Is Absolutely Glorious: ‘I’ve Never Seen Selfishness Like This’ 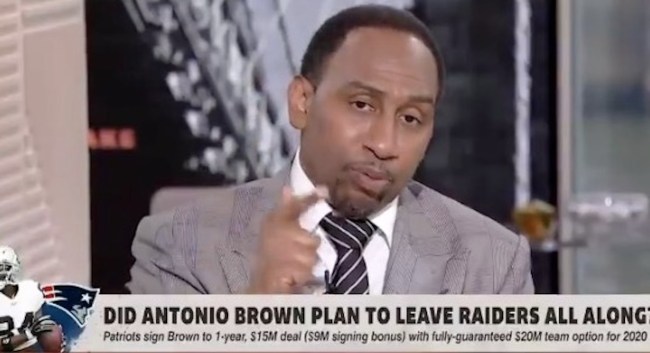 Given that the majority of the recent Antonio Brown drama — you know, being released from the Oakland Raiders and signing with the New England Patriots mere hours later — happened over the weekend, ESPN’s Hot Taker in Chief, Stephen A. Smith, had an entire weekend to gather his thoughts on the egomaniacal wide receiver, and boy did he deliver.

When Stephen A. and Max Kellerman reconvened on Monday’s episode of First Take to discuss Brown’s seemingly orchestrated exit out of Oakland, Stephen A. held absolutely nothing back when undressing the wide receiver, calling Brown’s recent behavior “a level of selfishness the likes of which most of us haven’t seen.”

Bemoaning Brown’s selfishness, dishonesty, and apparent willingness to throw those close to him under the bus for his own personal gain, Stephen A. made sure to make clear how he really feels about AB:

I've never seen selfishness like this. I just don’t want to hear a different opinion on this: pic.twitter.com/l3F3BRx8Rp

Smith took his take even further, saying that Brown’s narcissistic behavior is potentially dangerous, as any African American emulating the selfish wide receiver’s behavior will “pay a price that will cost you everything”. Similarly, ex-Patriots and Jets lineman Damien Woody called Antonio Brown “crazy”.

Stephen A’s Antonio Brown takes weren’t restricted to just First Take, though, as he appeared on Get Up earlier in the day, where he said that everyone associated with AB should be “ashamed”:

Stephen A. wasn’t the only ESPN analyst to go in on Antonio Brown, as Get Up‘s Mike Greenberg called Antonio Brown’s move to the Patriots “the most unprofessional act that I can ever remember seeing in professional sports” and that Antonio Brown only gives a damn about himself.