Stephen A. Smith And Chris ‘Mad Dog’ Russo Literally Have Pet Names For Each Other 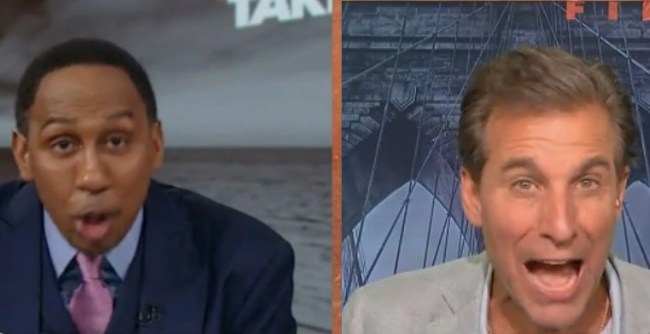 After a tumultuous few years under the stewardship of John Skipper, ESPN has largely righted the ship in recent years, developing some excellent young — and notably, female — talent over the last few years. Elle Duncan, for example, has become my favorite SportsCenter host, while Mina Kimes is my favorite NFL analyst on the network.

The proof is certainly in the pudding, too, as NFL Live — led by the likes of Kimes, Laura Rutledge, Marcus Spears, and Dan Orlovsky — delivered the show’s best audiences in five years this season. But while ESPN has been churning out young talent recently, the old heads are still the top dogs, as evidenced by the likes of Stephen A. Smith appearing on virtually every program they have.

Due to Stephen A’s status at ESPN and inherent personality, he’s often the most experienced and outspoken person appearing on any given panel. Except for Wednesday morning’s on First Take, which sees him square off against New York City radio legend Chris “Mad Dog” Russo.

Here’s Stephen A. Smith and Chris “Mad Dog” Russo fighting, screaming and going crazy about the Celtics, Nets and Kyrie Irving complete with eye rolling, references to the 61-62 Celtics and much more. pic.twitter.com/H81uXzKkyB

In this week’s version of “All Hell Breaks Loose Between Stephen A. Smith and Chris Russo,” here they are arguing about Deshaun Watson with Dog slipping in a classic Otto Graham reference. pic.twitter.com/She7cClwZL

Frankly, whoever came up with this idea at ESPN deserves a raise, because not only does Stephen A. and “Mad Dog” Russo sharing a screen deliver the sort of sports talk TV fireworks you’d expect, but there’s also an endearing respect between the pair because Russo is one of the few people in the industry who arguably has more experience than Stephen A. Smith in the art of hot takery.

Stephen A. Smith and Chris “Mad Dog” Russo have nicknames for one another

This mutual respect has born itself out in quite a hilarious way, in fact, as the pair have developed pet names for each other: Russo calls Stephe A. Smith “Stevie”, while Stephen A. refers to Russo as “Doggy”. I, unfortunately, can’t find any clips on Twitter, so you’ll just have to take my word for it.