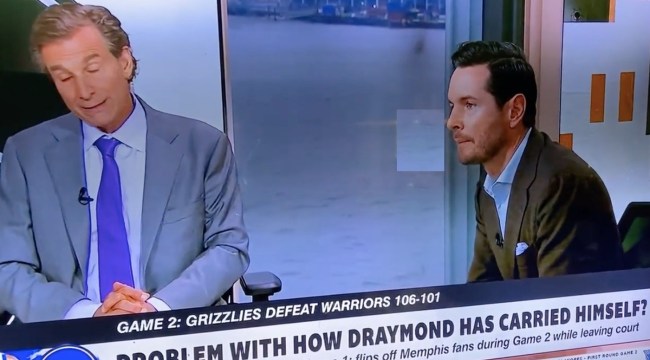 Former NBA player J.J. Reddick has become one of ESPN’s best NBA analysts during his short time with the company, and as a result, he makes frequent appearances on First Take, arguably the network’s flagship series (other than Sportscenter, of course).

Green, who was controversially ejected for a Flagrant 2 foul in Game 1 of the Western Conference Semifinals against the Memphis Grizzlies, was seen giving the finger to Grizzlies fans as he exited the court during Game 2.

Making a point about his dislike of Green’s outspoken nature, Reddick cut the veteran radio personality off to disagree with him, saying that the type of rhetoric he’s using is usually seen on Fox News.

“I’m not saying it’s a race situation, I’m saying that the fans you’re talking about [older fans], they take about athletes *that way*, the way you just talked about an athlete,” a clearly passionate Reddick said to Russo.

“People at Fox News talk about athletes that way. That’s my issue. I don’t actually care about the fans that watched Bob Cousey play, and watched Wilt Chamberlain play — I don’t care. I appreciate that they have been NBA fans for that long, but I don’t appreciate the undertone.”

“The people on FOX News talk about athletes that way. That’s my issue.”

The series between the Grizzlies and the Warriors, which is tied at one-game-a-piece following Memphis’ 106-101 Game 2 victory, will resume in San Francisco on Saturday, May 7.